Brexit: We won’t take your rules, PM to tell Brussels

February 2, 2020 by Joshua Marshall No Comments 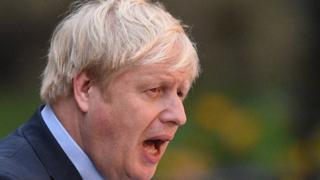 Boris Johnson is to say he won’t accept alignment with EU rules when Britain negotiates a trade deal with Brussels.

The prime minister will use a speech on Monday to toughen his stance ahead of trade talks following the UK’s formal withdrawal from the bloc.

EU chief negotiator Michel Barnier will also set out his approach to the talks, which are due to start next month.

It comes as European leaders expressed sadness at the UK’s official departure from the EU on Friday.

In what is being described as a comprehensive speech, Mr Johnson will tell the European Union he is prepared to accept customs checks at Britain’s borders if he cannot secure the sort of trade deal he wants.

Alignment is “not on the negotiating table”, he added.

Responding to the PM’s plans, shadow health secretary Jonathan Ashworth said: “We don’t want to see any watering down of environment standards or workplace rights.”

One option the PM could support would be a Canada-style free-trade deal which allows tariff-free trade for the majority of goods, but not include the UK’s dominant service industry.

Reports in recent days have suggested EU chiefs want the UK to continue to follow Brussels-made rules on standards and state subsidies – while accepting the jurisdiction of the European Court of Justice in any trade disputes.

The government is understood to be angry about perceived attempts by Brussels to go back on an agreement struck in October as part of the Withdrawal Agreement, the Sunday Telegraph first reported.

The PM is expected to tell the EU in the speech that he will accept no alignment, no jurisdiction of the European courts, and no concessions to any Brussels’ demands when talks start in March.

He is also preparing to rule out relaxing rules on workers’ rights, food hygiene standards and environmental protections.

The government also wants to make progress in striking free trade agreements with countries such as the United States, Japan, Australia and New Zealand.

The EU’s own approach to the negotiations needs to be agreed by all 27 member states – which would be unlikely to happen before the end of February.

While the UK officially left the EU at 23:00 GMT on Friday, it will remain wedded to EU rules during a transition period which ends in December this year.

The UK can request an extension to this transition period, but Mr Johnson has previously said he will not do so.

Meanwhile French President Emmanuel Macron has said in an open letter he was “deeply sad” by Britain’s official departure from the EU at 23:00 GMT on Friday.

Mr Macron wrote that the UK was leaving the EU, not Europe.

“Nor are you becoming detached from France or the friendship of its people,” he said.

“The Channel has never managed to separate our destinies; Brexit will not do so, either.”

And the EU Parliament’s Brexit co-ordinator Guy Verhofstadt responded to a message which had been projected onto the White Cliffs of Dover by a pro-EU group.

“We will look after your star and work to ensure the EU is a project you’ll want to be a part of again soon,” he said.