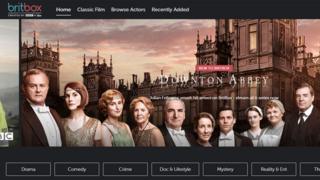 Downton Abbey is among the programmes available at launch

BritBox, a streaming service offering shows from ITV, the BBC, Channel 4 and Channel 5, has launched in the UK.

C4 and C5 have come on board after ITV and the BBC announced BritBox as a way to get into the paid streaming market.

The service will cost £5.99 per month and will mostly feature classic series, but will also include new shows, beginning with Lambs of God.

Ann Dowd, who plays Aunt Lydia in The Handmaid’s Tale, stars in Lambs of God

The drama stars The Handmaid’s Tale’s Ann Dowd, The End of the F****** World’s Jessica Barden and Essie Davis from The White Princess as nuns living on a remote island. It was originally shown on Australian TV in July.

Reemah Sakaan, ITV’s group director for streaming, said there was a “whole slate of original programmes” in development for BritBox.

While the service will be a second or third subscription for many viewers, it will be able to rival the likes of Netflix, Amazon Prime and Apple TV+, she said.

“It’s got the widest range of UK box sets of any service,” she said. “Ostensibly the other streamers are US-focused so they make dramas for the US market, whereas BritBox is the faces, people and places that you know.”

Some archive programmes that have been on services like Netflix will now move to BritBox, she said.

“For some time we’ve been bringing our shows back home and now that we’ve got a destination in BritBox, that’s something we’ll be doing more actively. We’ll still be working in partnership with Netflix and Amazon and all of the other streamers.”

How does the price compare with other services?

Dramas on the service at launch include Cracker, Prime Suspect, Brideshead Revisited and Ashes to Ashes; while comedies include Absolutely Fabulous, Extras, Blackadder and Fawlty Towers.

More than 600 classic episodes of Doctor Who – broadcast between 1963 and 1989 – will be available to stream for the first time by Christmas.

Shows and movies from Channel 4 and Film4’s back catalogue will be available in 2020, and original shows from Comedy Central UK will also feature.

Sakaan said having a big catalogue of classic shows “shouldn’t be underestimated” by those assessing BritBox’s chances of success.

“The new battleground, quite often in streaming, are shows like Friends, which are 20 years old and are the top performers,” she told BBC Radio 4’s Today programme.

Some of ITV and the BBC’s biggest hits of recent years, such as Killing Eve, Peaky Blinders and Bodyguard, will not be on it at first.

This is either because existing deals are in place with other streaming services, or because they are still on the broadcasters’ own catch-up platforms.

Shows are not expected to appear on BritBox until they have dropped off the BBC iPlayer, ITV Hub and All 4, which do not require paid subscriptions. The BBC was recently given permission to keep programmes on iPlayer for one year.

TV critic Scott Bryan said the idea of rival channels teaming up to try to compete with the likes of Netflix was “quite big news”.

“The issue is whether people are willing to pay towards them,” he continued. “And it will be interesting to see which shows end up being on which service.

“Some shows might be a co-production between the BBC and Netflix for example, and that might end up on Netflix.

“So for many of us there’s going to be a lot of confusion trying to work out which show is going to be on which platform.”

BritBox launched in the US two years ago and has a different catalogue of content, with 650,000 subscribers.