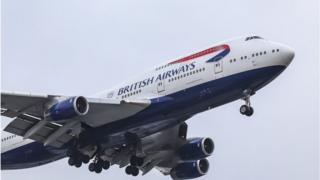 British Airways passengers say they are still struggling to get through to the airline after it wrongly told them their flights were cancelled.

Some said they had tried for “hours” to reach customer services, while others said they kept getting cut off.

BA pilots are due to strike on 9, 10 and 27 September – but on Saturday, customers with tickets booked for other days were told flights were cancelled.

It admitted the error and said it will refund those who booked alternatives.

It also said it was dealing with a backlog of 40,000 customer calls.

But two days after the mishap, passengers continue to vent their anger on Twitter.

Sarah from London told the BBC she would be flying to Turin with her partner and small children next week for a friend’s wedding.

But after BA wrongly said her return flight to London Gatwick on 8 September was cancelled, she was forced to buy another flight with Ryanair.

“It is much less convenient and will cost us more. But BA will only refund the cost of its own flights, not the difference we’ve paid,” she said.

It means she will miss her friend’s wedding breakfast and have to change car hire companies, pushing up her costs. In total she stands to lose £500.

BA said it was “working tirelessly” to help fix people’s problems but faced a huge volume of customer calls.

Some customers received two conflicting emails on Saturday. The first told them their flights had been cancelled and that they should rebook or seek refunds. The second said their original flights would go ahead as planned.

But in the second email, passengers were not given a link to automatically rebook onto their original flight, meaning they had to contact BA directly.

Some customers say they have spent “days” trying to get in touch with BA’s customer services without success.

One woman, Josie Simpson, told the BBC she called the airline 67 times to try to rebook a family holiday to Florida.

The company’s Twitter feed has also been inundated with messages from frustrated people.

A BA spokeswoman said customers who were told their flights were cancelled in error and had booked alternative flights or incurred other expenses would be entitled to refunds if they submitted receipts.

But on Sunday, some people said they were told that wasn’t the case.

Kaelee Matthews, from Cardiff, said BA had told her it wouldn’t give her a refund for her flights to Orlando – which the airline had initially said were cancelled – because they were still operating.

She has booked new flights with Virgin for her and her partner – costing an extra £440 in total.

“We are disgusted with BA,” she said. “We don’t know what to do now. Virgin can’t refund us, but we understand that. Travel insurers say we’re not covered either.”

Have you been affected by the BA issues? Share your experiences by emailing haveyoursay@bbc.co.uk.