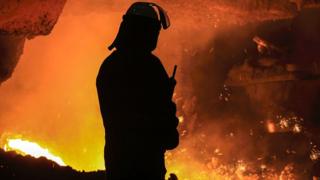 British Steel’s French factory has been advertised for sale separately from the UK operation, despite a Chinese firm’s deal to rescue the whole company.

Last month, China’s Jingye agreed to buy British Steel, paying about £50m to take over the collapsed business and save about 4,000 jobs.

French authorities have powers to block the sale of the Hayange plant and may have sanctioned the “for sale” ads.

The Financial Times reported Jingye executives “were furious” at the move.

It is unclear to what extent a separate sale of the northern French steel mill would complicate Jingye’s deal for the rest of the business.

One source told the BBC that putting the Hayange plant up for sale looked like a “contingency measure” in case the Jingye acquisition fell through.

The plant makes steel for the French rail network, including the state-owned train operator SNCF, and is considered a strategic asset.

When British Steel collapsed, control of the holding company passed to the UK Insolvency Service, which is responsible for selling the assets. Although the service is the beneficial owner of Hayange, day-to-day operational control of the factory remains in France.

Adverts for the sale of a steel mill in north east France appeared in the Financial Times (FT) and France’s Les Echo. The ads did not name the plant, but said it produced “steel railway products for railways, subways and tramways” and employed about 450 people – descriptions which match the Hayange facility.

The FT reported that Jingye executives have contacted the French finance ministry to discuss Hayange. No one from the Chinese company was immediately available for comment.

One potential bidder for the Hayange site is, according to the FT, Ascoval, a French steel company controlled by Greybull Capital, which used to own British Steel several years ago.

When Jingye agreed to buy British Steel last month it said it planned to invest more than £1bn and would seek to “preserve thousands of jobs in a key foundation industry for the UK”.