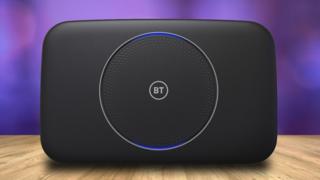 Broadband provider BT will charge new customers up to £50 if they do not send their router back at the end of their contract, in an effort to reduce waste.

Since December, BT’s contracts have stated that the company retains ownership of the wi-fi routers and TV set-top boxes it sends to customers.

The company told the Financial Times that it would “refurbish” the returned equipment so that it could be reused.

BT told the BBC the change would eventually apply to its EE and Plusnet subsidiaries too.

It will charge customers between £43 and £50 if they want to keep their router, depending on the model.

It has not reduced its monthly subscription charges as a result of the change, but it said customers would not be charged up-front for a router or TV box.

Customers will be sent a padded envelope to return their router to BT.

They will also be able to drop off equipment at a BT and EE shop on the high street.

The company said any previous customer who still has an old BT router lying around is welcome to return it.

The company estimates that the change will stop a million set-top boxes and routers a year being thrown away.

“This will help to limit the amount of waste going into landfill, and allows us to refurbish more equipment and move towards a more sustainable model,” the company said.

Like many broadband providers, BT “locks” its routers to its network, so they cannot be used with rival broadband services.

“It would surely be even more environmentally friendly if the devices allowed you to use them with other broadband services,” cyber-security expert Graham Cluley told the BBC.

“That way they wouldn’t need to be sent back to BT.”

BT told the BBC that its routers were locked to its network so that it could control software security updates and offer better customer support.