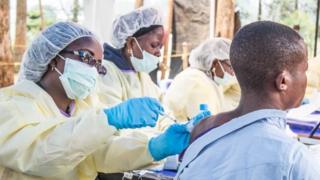 “I think it’s profoundly naive to think we have a handle on them,” says Richard Hatchett, the chief executive of the Coalition for Epidemic Preparedness Innovations (CEPI).

His organisation was set up after the Ebola epidemic of 2014, when a vaccine was developed, but too late to have any impact on the outbreak.

With more than $750m (£571m) from governments and organisations like the Bill & Melinda Gates Foundation, it is funding promising new vaccine technologies.

In particular, CEPI wants vaccines that can be produced quickly. “In most circumstances that we have an epidemic, speed becomes really, really important,” Mr Hatchett says.

Traditionally, vaccines are made by taking the original virus or bacteria and disabling it in some way.

The idea is to degrade the microbe so that it is no longer a health threat, but can still trigger a response from immune system. The body can then use that immune response if it ever comes into contact with the real infection.

That kind of approach has been terrifically successful, saving millions of lives. The trouble is that developing and manufacturing vaccines that way is slow and expensive.

Frederic Garzoni is one of many scientists hoping to change all that.

He spent years in France working on proteins, examining and tweaking the building blocks of bodies.

But in 2016 he came across something he thinks is very special. A protein structure that self-assembles into a football-like molecule, that can be easily manipulated and be produced in large quantities, and can perhaps be used to vaccinate against a host of diseases.

“I thought that is the best protein I have seen in 15 years. I’m quitting my job and I’m going to focus on this,” he said.

Mr Garzoni, and others, are manipulating all sorts of microbes, often at the level of DNA, to make particles that spur the immune system into action.

His research has been helped by powerful tools, including cryogenic electron microscopy (cryo-EM), a procedure that lowers samples to extremely low temperatures and then bombards then with electrons.

The resulting pictures render almost atomic detail, allowing scientists to identify useful properties, that would have been unknown before cryo-EM came along.

At the University of Bristol, those images have been combined with powerful cloud-computing services provided by US tech giant Oracle, which allow detailed pictures to be created more quickly and cheaply than ever before.

With that kind of detail, researchers can identify all sorts of useful properties.

There are dozens of different research groups developing new technologies to create vaccines in different ways.

Jon Cuccui is an associate professor of microbiology at the London School of Hygiene and Tropical Medicine.

His research has focused on vaccines to tackle bacterial infections. The approach has been to use a safe strain of the escherichia ecoli bacterium as a molecular factory to produce a sugar-protein complex, that can train the host to recognise many dangerous infections.

“You end up with an infinite quantity of vaccine, that is scaleable… and therefore much cheaper to produce,” he said.

Mr Cuccui says the ability to quickly determine the genetic blueprint of an organism and then tweak that blueprint has made a big difference to his research.

“We can go and target an organism and develop a prototype vaccine at a much faster rate than we could 10 to 20 years ago.”

The long road to vaccine approval

Once scientists have developed a promising vaccine, they conduct pre-clinical trials on mice and larger animals. That stage alone can take years of research. But if the treatment is promising then it will be tested on humans.

Being able to develop and manufacture vaccines more cheaply is the goal of Mr Hatchett’s organisation, CEPI.

“We don’t want to just develop high-price vaccines that can only be afforded by the one percenters in the developed world… the epidemic diseases we are focused on are much more likely to emerge in lower and middle-income countries,” he says.

Giant pharmaceutical companies are some of the most important operators in the vaccine business.

GSK is one of the biggest players in the field, making vaccines that protect against 21 diseases.

“This is a new golden age of vaccines as far as I’m concerned,” says William “Rip” Ballou, head of US vaccine research at pharmaceuticals giant GSK.

He is particularly excited about a technology, called self-amplifying mRNA (SAM), which starts with part of the genetic code of a virus, converting that into messenger RNA (molecules which carry instructions for the body about how to build proteins).

Once injected into the body, the molecule can use the body’s own systems to trigger an immune response to the original virus.

Potentially it allows GSK to find candidate vaccines more quickly, which could be vital when responding to an outbreak.

It could also revolutionise the way vaccines are manufactured. At the moment each vaccine has its own dedicated production line, but SAM could see the same equipment used to make different vaccines – which would be much cheaper and faster.