Burger King ditches free toys and will ‘melt’ old ones 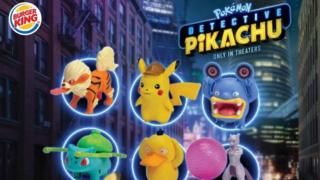 Burger King will no longer give away plastic toys with children’s meals, amid pressure to reduce plastic waste.

The fast food restaurant chain is also encouraging customers to bring in old promotional plastic toys, which it says it plans melt down to make other items.

This move comes after two Hampshire children petitioned the fast food giant and its rival McDonald’s to stop giving away free plastic toys.

McDonald’s said its customers would be able to choose between a toy and fruit.

The petition organised by Ella, aged nine, and Caitlin McEwan, aged seven, calling for companies to “think of the environment and stop giving plastic toys with their kids meals” has received more than half a million signatories.

The girls wrote “children only play with the plastic toys they give us for a few minutes before they get thrown away and harm animals and pollute the sea”. Instead they suggested any giveaways could be made from sustainable materials.

Just hours before Burger King announced its change of policy, rival chain McDonald’s said it had no plans to scrap its toy giveaways. Instead customers would be given the option of swapping the toy for a sachet of fruit if they wished.

McDonald’s also plans a trial from early next year, enabling parents to choose between a book or a toy.

“The gifts provide fun for many families and children. That’s why we’ll be running these trials, in order to give our customers a choice; they also can choose not to have a toy or gift at all,” said Paul Pomroy, chief executive of McDonald’s UK and Ireland.

But Burger King said it wanted to undertake “significant action” to address the issue of plastic waste.

The fast-food restaurant chain will provide bins in its restaurants to collect old toys. It said the move would save 320 tonnes of plastic a year.

Pentatonic, which makes consumer goods from recycled materials, is working with Burger King to recycle collected plastic toys into restaurant items such as trays and play areas.

Most toys today are made from three polymers – polypropylene, ABF and PET.

Pentatonic said no harmful gasses would be released to the environment, when these plastics were melted. The melted plastic forms a continuous strip and can then be cut into beads or pellets which are used to manufacture new plastic products, the firm said.

“If we were to use recycled polypropylene to make a tray, instead of new plastic, total energy consumption would be reduced by approximately 88% and carbon emissions would be cut by approximately 70%,” Pentatonic’s chief executive Johann Boedecker told the BBC.