Bye box: How streaming could kill the games console 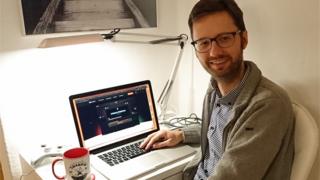 Paul Kamma used to lead an uncomplicated life. As a video games enthusiast, he’d while away his time playing first-person shooters and other high-octane games.

Then he got married and started a family.

“When you come home, you play with your kids… You don’t have much time to play big games like GTA [Grand Theft Auto],” he says.

“But I still wanted to do this because I loved it.”

As well as not being able to spend as long at his computer as he once did, Mr Kamma also didn’t have free reign over the household TV like before.

So, he turned to cloud gaming, which allowed him to stream video games to a simple laptop computer. Anywhere he went, he could still have access to his favourite games.

Mr Kamma lives in Germany. The streaming service he chose, Shadow, allowed him to set up a remote PC on a server somewhere in The Netherlands.

He could install games on the server and connect to it via his computer, which displayed the game screen and allowed him to control his character.

That’s what cloud gaming is – your game runs on a powerful computer somewhere else and you just connect to it.

While such a set-up has been possible for some time, cloud gaming will soon be available from Google, and Microsoft as well.

This month Google will launch its Stadia service in the US, UK, Europe and Canada, and Microsoft has just begun previewing its Project xCloud.

Some of these services involve monthly subscription costs, and in Stadia’s case, gamers are being encouraged to buy a new controller (£59.99 each).

It connects directly via wifi to the game you’re playing, rather than being plugged into a device in your home that then sends the controller data over the internet.

But the key element with all these services is that fundamental shift away from running games on hardware in your home, to running them on a beefed-up server somewhere else instead. By offering this flexible, play-anywhere option, some think it could mean the death of the home video games console.

“I pre-ordered Stadia because I really liked the idea as a console replacement,” says Mr Kamma.

The first home video games console that could connect to a TV was the Magnavox Odyssey, released in 1972.

Today, the market for consoles is sizeable. If you add up all the PS4, Xbox One and Nintendo Switch devices that have been sold, you get roughly 180 million units.

“The interesting thing is that the number of people around the world who buy devices like this isn’t really growing – and it hasn’t been for some time,” says Piers Harding-Rolls, a games industry analyst at IHS Markit.

Cloud gaming, he suggests, is really an attempt to make video games more accessible, potentially opening them up to a wider audience. It may also appeal to people like Mr Kamma, who already enjoy games but who might be spending less and less time on them because of other commitments.

Claire Thomas, a gamer and software engineer at tech firm Improbable, says she thinks streaming could have a democratising effect.

While some of her pals don’t have the latest hardware, they can still join in thanks to streaming.

Mr Harding-Rolls points out that cloud gaming of this type has already been attempted, 10 years ago, with a service called OnLive.

It was reasonably successful, perhaps even ahead of its time, but it went the way of the dodo. Partly because back then internet infrastructure was not as robust as it is today, and connection speeds were slower.

“It cost them too much to stream the content, and that left them with very little room to manoeuvre in terms of acquiring content,” says Mr Harding-Rolls.

Services like Stadia and xCloud will be vying to have exclusive rights to the biggest games. Currently, few exclusives have been announced for Stadia, for example, which has not gone unnoticed.

As with Netflix or Amazon Prime Video, these rights deals could mean everything in terms of popularity with the target audience. Consoles also rely on exclusivity to some extent – these tie-ups are already de rigueur in the industry. Cloud services may find themselves competing for exclusivity not just with each other but with the traditional console market too.

There are also technical hurdles. When playing most video games, it’s essential to have constant, uninterrupted control, and clear video output of the game world. A dodgy internet connection means your killer move at the key point in a battle might not transmit in time – costing you your virtual life.

It’s a problem known as input lag. Google’s wi-fi controller is an attempt to conquer it by transmitting commands directly to the game server.

Ms Thomas argues that having a good internet connection will soon be the only barrier to gaming – but your bandwidth might depend on how close you happen to live to the nearest cloud gaming data centre.

Gamers who have been testing early versions of the latest game-streaming services have had promising though not flawless experiences. Thomas Wilde, writing for tech site GeekWire, notes that his connection to the beta version of Project xCloud was reasonably good.

However, he writes: “You end up transmitting and receiving a lot of data when you play games via xCloud, and it can easily overwhelm a wi-fi connection.”

Even if everything does run smoothly, neither Ms Thomas nor Mr Kamma see cloud gaming as spelling the death of the console just yet.

Mr Kamma points out that the next generation of consoles may offer ultra high-resolution gaming. It will be hard to stream games at such quality, and he thinks there will continue to be a market of gamers keen to have the best systems at home.

How will game developers take advantage of cloud gaming? Jamie Woodcock, a digital economy researcher, points out that some publishers may find themselves offering games for free via subscription services.

“If you’re no longer selling it independently but putting it on a streaming platform, is the publisher going to make the same money?

“I think it would be safe to say that they would make less.”

That might mean that developers feel ever more inclined to offer in-game purchases – new virtual weapons or costumes, for instance – to “upsell” the experience.

It’s already common in some games, including Fortnite, but cloud gaming could make it all the more attractive for publishers.

Cloud gaming certainly feels like an exciting new paradigm. We’ll soon find out whether gamers take to it or not, but consoles – those reliable, trusty boxes you own yourself – aren’t going anywhere yet.