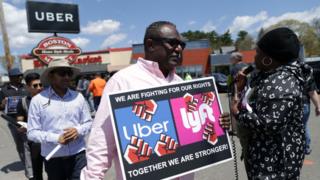 Lawmakers in California have passed a law that paves the way for gig economy workers to get holiday and sick pay.

Assembly Bill 5, as its known, will affect companies such as Uber and Lyft, which depend on those working in the gig economy.

Some estimates suggest costs for those firms would increase by 30% if they have to treat workers as employees.

But opponents of the bill say it will hurt those that want to work flexible hours.

The business models of gig economy companies are already under strain – Uber lost more than $5bn in the last quarter alone. Some estimates suggest that having to treat workers as employees, rather than independent contractors, could increase costs by as much as 30%.

Uber and rival ridesharing service Lyft joined forces to push back again the bill. They suggested a guaranteed minimum wage of $21 per hour instead of the sweeping changes the bill would bring.

But that pledge wasn’t enough to sway California’s Senate, and the state’s governor Gavin Newsom is expected to soon sign the bill into law. That paves the way for California’s 1 million gig workers to gain added rights next year.