Can the world’s largest HMV store work in a digital age? 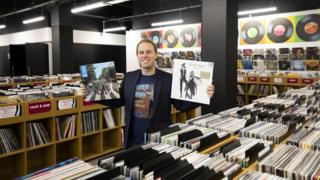 The world’s largest HMV store is opening its doors to shoppers just months after the chain announced dozens of branch closures.

Spanning 25,000 sq ft across one floor – almost the size of 12 tennis courts – HMV Vault in Birmingham promises to become a “nirvana for music and film fans” with dedicated spaces for vinyl, CDs and DVDs as well as a performance area for bands to take to the stage.

But less than a year since the company called in administrators for the second time in a decade, and closed a raft of existing stores, can this ambitious new site, opening on Friday, help restore its fortunes in an age when digital purchases apparently rule?

The move is all part of new owner Doug Putman’s vision to “simplify the offer” for HMV’s customers, combining “clicks and mortar” in time to mark the firm’s centenary on the high street in 2021.

HMV said the new branch, opening in Dale End in the city centre and which it claimed would be Europe’s biggest entertainment store, “reflects the resurgence of the HMV brand”.

The company said it would have an “unrivalled” selection of LPs – as sales of vinyl hit a 25-year high. Its opening date is timed to coincide with National Album Day, which is on Saturday, the day after the doors open.

A permanent stage has been installed in the Vault to showcase live music and performances.

People visiting the store for the first time on Friday said they had queued since the early hours ahead of a performance by former One Direction member Liam Payne and songstress Beverley Knight.

One visitor said the prospect of live performances made the store “more interesting”.

“I didn’t realise it was here until I found out on social media but I’m really, really excited,” she said.

A total of 400 people will be allowed in from 12:30 BST to watch the live shows in store while doors will open to the general public at 14:00.

Its launch has followed hot on the heels of the opening of the world’s biggest Primark in the city earlier this year.

That huge clothing store, just a short walk away from the new Vault, was built on the site of a former shopping centre that used to be the home of a large branch of HMV spread across several floors.

Despite its problems, HMV still brands itself as the UK’s largest entertainment retailer with 114 stores and its current store in Birmingham’s Bullring is planned to remain open after the Vault’s launch.

HMV insisted the new shop would give music fans what they want.

Simon Winter, from the firm, said: “We have really listened to customers and what they tell us is that they want the face-to-face interaction of flipping through stacks of vinyl opposite another person to say ‘hey have you heard this?’ and share that experience.

“We know that people want to stream music when they’re out, but also want to physically go in store and purchase something special, something they love, to add it to their collection at home.”

But retail analyst Richard Hyman said he was sceptical about how HMV would continue to thrive when the same album could be bought online at a lower price.

“It is very important to remember that the first products that online really took over were books and records,” Mr Hyman said.

“The thing about a book and a record is that it is the same product irrespective of where you buy it from.

“We all want human interaction but do we want to pay for it?

“I think this is a very courageous venture but it’ll need more than courage to make the economics stack up.”

But it seems there is support for the move.

Gennaro Castaldo, a spokesman for the BPI, the recorded music industry’s trade association, agreed streaming and physical sales complemented each other.

He said people could discover music through streaming, then go and buy a CD, vinyl or even a cassette, to keep.

Mr Castaldo said creating stores with an “independent vibe”, in which music lovers could find a sense of community, would create an “emotional experience” which appealed to super fans.

He also said the brand’s decision to move stores from prime locations – such as London’s Oxford Street, or HMV’s former Birmingham home of the High Street – meant it could manage rents and other costs in a way it could not previously do.

Kim Bayley, from the Entertainment Retailers Association, said: “It is definitely a really positive move, it shows their confidence that consumers still want to own the product.

“We are also seeing a complimentary ecosystem between streaming and owning and, with youngsters, we are seeing them buying more and more vinyl and HMV are moving to have more of that in stores to capitalise on that ownership trend.

“A large store like this will also allow for more in-store events, which will create a slightly more interesting vibe than the average store.

“We are also seeing a growth in independent music shops, again because people want that entertainment vibe.”

The fact HMV appears to be trying to embrace the vibe of independent record stores is unlikely to be lost on those who have enjoyed working or shopping in those smaller shops – or indeed used to before they closed.

Lee Dearne, the owner of one of Birmingham’s remaining independent record stores the Diskery, said while he did not mind competition, the opening of the new HMV was a “concern”.

“I think we’ve still got clientele who will come in here as our LPs are second hand,” he said. “The people who come in here want the original vinyl.

“HMV can buy in job lots, say 50 LPs of Led Zeppelin, and they can get them at a cost. Whereas us independents can’t compete with that.