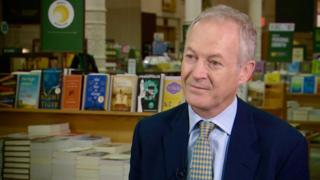 James Daunt, credited with a turnaround at Britain’s biggest book chain, Waterstones, is plotting a similar strategy to address the troubles at America’s Barnes & Noble.

In the 1990s, the company was king of America’s bookshops, a fast-expanding corporate behemoth that revolutionised the industry and crushed local competitors.

Its success seemed so complete it inspired the 1998 romantic comedy You’ve Got Mail, in which Meg Ryan falls for Tom Hanks, even as his FoxBooks forces her family’s shop out of business.

Sales in the company’s retail business have declined for almost a decade, as the firm faced economic recession, e-books and the steady desertion of shopping malls.

It has cycled rapidly through chief executives, and spent millions of dollars creating the Nook e-reader, which failed to gain traction.

Efforts to win back customers by adding different non-book items and full service restaurants have shown little sign of success, despite evidence of revival at independent bookstores.

Mr Daunt said this book display had “no rhyme or reason”

In June, long-time chair Leonard Riggio announced the sale of the business to hedge fund Elliott Advisors, which installed the Waterstones boss at the helm.

On a recent visit to one of the company’s flagship locations in New York City, Mr Daunt was unsparing about the problems he sees.

The book display at the entrance? “There’s absolutely no rhyme or reason to it.” The shelves upstairs stocked with toys? “A lot of plastic.” The website? “We have to definitely change and invest.”

And yet, despite the challenges – even an escalator appeared broken – Mr Daunt says he is confident he can change the story.

The 55-year-old, tall, slim and soft-spoken, has almost 30 years of bookselling in the UK behind him, first at Daunt Books, the small chain of upmarket shops he founded in Marylebone in 1990 and then at Waterstones, which he took over as chief executive in 2011 as it risked sinking into administration.

Waterstones turned profitable in 2016. Mr Daunt credits the recovery to his decision to make the chain act more like an independent bookshop, with local managers empowered to stock the titles they think will suit their particular markets.

He’s plotting a similar strategy now. “It is relatively simple. Fill bookshops with the books their customers want,” he says.

America’s size makes the mechanics of some parts of book selling, such as distribution, more challenging, while the threat from Amazon includes not only its online sales but a small, but growing number of dedicated book shops.

Barnes & Noble shops are often found in suburban malls, where they occupy huge, 26,000-square-foot spaces – a challenge for any retailer these days, let alone a bookshop.

“You have to drive there, you have to get out of your car, park – all this stuff. It’s not like walking down the street and saying, ‘Oh those book choices look interesting. Let’s pop in,” says John Tinker, an analyst at Gabelli & Co, who has followed Barnes & Noble for years.

“He’s following the same playbook as in England and to the extent it worked in England, that increases the odds that it works over here . But there’s a lot of execution questions. Waterstones was sort of simpler,” he says.

Oren Teicher, chief executive of the American Booksellers Association, says the US has relatively few bookstores compared to Europe and the UK, suggesting there is room for Barnes & Noble to succeed – especially given the growth local shops have seen in recent years.

Still, the company remains awkwardly wedged between Amazon and the “indies”. In the UK, Waterstones has opened unbranded shops which look like small independent bookshops – so-called “stealth” outlets that drew outcry.

“It’s hard to take a 30,000-square-foot superstore out in a strip mall and convert that into a neighbourhood store,” Mr Teicher says. “There’s got to be authenticity.

Mr Daunt, who will remain in charge of Waterstones and run it separately, has some room to experiment.

More than 200 Barnes & Noble leases are up for renewal in the next two years – offering an opportunity to push for lower rents, shrink square footage – or move to other locations entirely.

Analysts expect him to press publishers for better terms, while Elliott’s backing provides – at least for a few years – a shield from short-term financial pressure and the resources to invest.

Mr Daunt estimates he will need some $100-$200m to upgrade everything from store furniture and fixtures to IT.

“Good bookstores are fabulous things and the problem with this one is it’s just not a very good bookstore,” he says of his visit to one of the New York City outlets.