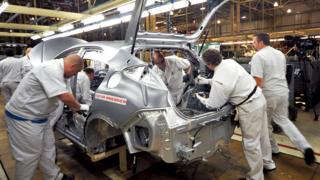 Hopes of a big rise in UK car sales in September have been dashed, spreading more gloom about the sector’s health.

Sales in what is the industry’s second most important month rose 1.3% from a year earlier, well below the double-digit growth hoped for.

In the first nine months of the year, car sales fell 2.5% to 1.86 million, the Society of Motor Manufacturers and Traders (SMMT) said.

The small rise compared with what Mr Hawes described as a “pretty awful” September 2018, when sales slumped 20% due to the introduction of tougher emissions rules restricting the availability of certain vehicles.

“Any uplift from last year was welcome,” Mr Hawes told the BBC. “So we were hoping for something like a double-digit increase this September.”

March, followed by September, are traditionally the industry’s most important sales months due to licence plate changes typically prompting a spike in demand.

Mr Hawes said: “Consumer confidence is being undermined by political and economic uncertainty. We need to restore stability to the market which means avoiding a no-deal Brexit and, moreover, agreeing a future relationship with the EU that avoids tariffs and barriers that could increase prices and reduce buyer choice.”

Sales of diesel models were down 20.6% during the first nine months of 2019, while demand for new petrol models was up 2.6%.

The market for battery electric cars is up by 122.1% but the plug-in hybrid sector is down by 29.2%. While growth in electric cars is good news, it still only represents a fraction of the market, Mr Hawes said.

Government grants for new low-emission cars were slashed in October last year, meaning hybrid models are no longer eligible for the scheme.

Motoring groups have warned that the decision will leave the UK struggling to meet targets to reduce vehicle emissions.

Karen Johnson, head of retail and wholesale at Barclays Corporate Banking, said: “The first increase in new car sales for some time will offer no relief, as the comparison with an extremely weak September 2018 was expected to be better than this.

“New fuel regulations lowered sales a year ago, and this time around it’s hard to look beyond a lack of consumer confidence due to Brexit uncertainty as the primary reason for the pick-up not materialising as hoped.

“We’re also seeing increasing evidence of purchasers who would previously have looked to buy a new vehicle instead switching to the used car market.”