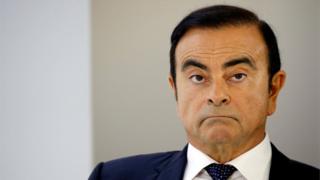 It remains unclear how Mr Ghosn managed to leave Japan, where he was awaiting trial

A lawyer for former Nissan chief Carlos Ghosn says he is “dumbfounded” by the news that his client has fled to Lebanon after jumping bail in Japan.

“We were completely caught by surprise,” defence team head Junichiro Hironaka told reporters, adding that he had not spoken with Mr Ghosn.

On Tuesday, Nissan’s ex-CEO, who was awaiting trial on financial misconduct charges, confirmed he had left Japan.

He said he had not fled justice but escaped “political persecution”.

The 65-year-old was one of the most powerful figures in the global car industry until his arrest in November 2018.

He was born in Brazil to parents of Lebanese descent and was raised in Beirut, before travelling to France for further education.

The French and Lebanese foreign ministries say they have no knowledge of the circumstances of Mr Ghosn’s departure from Japan and subsequent arrival in Lebanon.

Lebanese media has said he flew in on a private jet in via Turkey.

What did his lawyer say?

“I am dumbfounded,” Mr Hironaka told reporters later on Tuesday. “I don’t even know if we can contact him. I don’t know how we will proceed beyond that.”

He added that his legal team was still in possession of his passports.

This house in Beirut belongs to Mr Ghosn. His wife, Carole, was born in the city

Mr Ghosn was released on $9m bail in April under strict conditions that barred him from travelling abroad.

How he could have left Japan remains unclear. It is not known whether he was holding duplicate passports – as some businesspeople are sometimes allowed to do.

There was video surveillance of his home, and he had restricted phone and computer usage.

What did Carlos Ghosn say?

Mr Ghosn released a statement after news agencies on Monday reported he had travelled to Lebanon.

Confirming he had gone to the Middle Eastern country, Mr Ghosn said he would “no longer be held hostage by a rigged Japanese justice system where guilt is presumed, discrimination is rampant, and basic human rights are denied.

“I have not fled justice – I have escaped injustice and political persecution.”

The former Nissan boss will have no trouble finding somewhere safe and luxurious to stay in Lebanon. Of Lebanese heritage, Mr Ghosn spent his early years here with family members. He’s much celebrated and even appears on one of the country’s postage stamps.

He is also the co-founder of the IXSIR vineyard here, which boasts wines that are rich and “of remarkable elegance”.

Escaping Japan would have been difficult given that his three passports were taken from him, but Lebanon has less than stringent border controls. Mr Ghosn is said to have arrived by private jet on Sunday evening and someone of his stature would have been able to breeze through immigration. When in town, he is often escorted by the security services.

He’s been held in Japan for more than a year and in that time Lebanon has changed dramatically. Months of protests against corruption and the political elite have ousted the prime minister, and there’s a full-blown economic crisis.

Japan gives millions in aid to Lebanon and will want Mr Ghosn returned. He may have successfully fled Japan, but he hasn’t escaped his troubles.

What charges does Carlos Ghosn face?

Once considered a hero in Japan for turning around Nissan – even becoming the subject of a Japanese comic book – Mr Ghosn spent 108 days in custody after his arrest in Tokyo in November 2018.

Nissan sacked him three days after his arrest.

Prosecutors allege that he underreported his salary and diverted money from the carmaker to cover potential personal trading losses.

He is also accused of transferring Nissan funds to a dealership in Oman, and skimming off $5m for his personal use. Mr Ghosn denies all the charges.