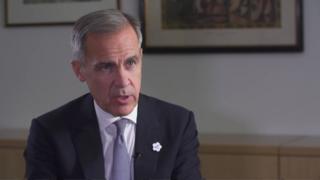 The Governor of the Bank of England has told the BBC that the new Brexit deal struck by the government is “welcome” and a “net economic positive”.

Mark Carney said the deal “takes away the tail risk of a disorderly Brexit”.

However the governor warned that the deal might not boost the economy to the same extent as the deal put forward by Boris Johnson’s predecessor, Theresa May.

Mr Johnson’s deal is due to be voted on by MPs on Saturday.

Mr Carney said that the “different” future relationship negotiated this week meant it “remains to be seen” if overall the deal would be as positive for the economy as the deal put forward by Mr Johnson’s predecessor, Theresa May.

When pressed about the impact of extra customs checks likely from the more distant relationship with the EU envisaged by the new deal, Governor Carney said its economic outcome would not “overlap” the closest version of the previous Theresa May deal, “and that last bit is diplomacy”.

The chancellor of the exchequer himself Sajid Javid has been less diplomatic – refusing to recalculate Treasury impact assessments which previously showed a smaller economy from a basic free trade agreement, as requested by some MPs in time for the crucial Commons vote on the deal.

But overall the government and Governor share the view here at the IMF annual meeting in Washington DC that the progress towards any sort of deal is universally welcomed at a precarious time for the global economy.