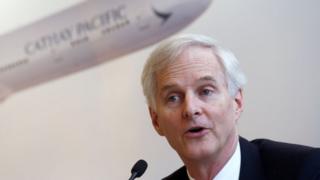 It comes weeks after the airline became embroiled in controversy over its response to pro-democracy protests in the territory.

Two executives have quit over the affair so far, including former boss Rupert Hogg.

Cathay told the BBC that Mr Slosar had considered retiring for “some time”.

The airline ran into trouble in early August, when Mr Hogg told staff the airline would not stop them from joining the demonstrations sweeping Hong Kong.

However, a week later he changed his stance after facing intense pressure from the Chinese government and a consumer boycott on the mainland.

Staff were told they could be fired if they “support or participate in illegal protests”, and several were dismissed.

It was not enough to stop Mr Hogg being forced to quit over the controversy several days later, along with chief commercial officer Paul Loo.

At the time, Mr Slosar said it was time to put “a new management team in place who can reset confidence”. He added that “recent events” had put the airline’s “reputation and brand under pressure”.

This could simply be a routine retirement – John Slosar had widely been expected to retire soon – but the timing of this announcement is surprising, and comes at a turbulent time for Cathay.

In the last few weeks, Hong Kong’s flagship carrier has seen two of its top bosses resign – under pressure, some have speculated, from Beijing.

Mr Slosar had reportedly defended his workers in the initial stages of the protests, saying Cathay wouldn’t “dream of telling its staff what they have to think about something”.

But he later changed his mind, bowing to the Beijing aviation regulator’s demands to suspend workers who supported the protests.

While Cathay and Mr Slosar have said the reason for his departure is his retirement, it will no doubt raise questions about how much control China has over the firm.

Protests in Hong Kong began about 12 weeks ago over a proposed extradition bill between the territory and mainland China, and have evolved into demands for greater freedoms.

Hong Kong is part of China, but its citizens have more autonomy than those on the mainland.

Mr Slosar will be replaced by Patrick Healy, who joined Cathay Pacific’s owner Swire Group in 1988.