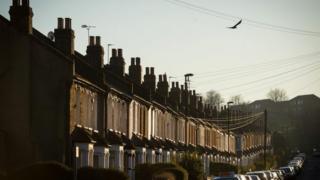 House prices rose by a whisker during the summer as the UK housing market was subdued by cautious buyers and sellers, the UK’s biggest lender has said.

The Halifax, part of Lloyds Banking Group, said that prices rose by 0.1% in June to August compared with the previous three months.

Few properties are changing hands with the political and economic situation leading people to stay put.

However, the lender said the market was still “resilient” amid the uncertainty.

The Halifax said that average UK house prices rose by 0.3% in August compared with July, with prices now 1.8% higher than they were a year ago. The annual change has accelerated slightly compared with recent months.

Russell Galley, managing director of the Halifax, said that prices had effectively been flat since March. Caution among buyers and sellers had put the brakes on price rises despite strong employment and relatively affordable mortgages.

“Although the housing market will undoubtedly be influenced by events in the wider economy, it continues to show a degree of resilience for the time being,” he said.

“We should also not lose sight of the fact that the single biggest driver of both prices and activity over the longer-term remains the dearth of available properties to meet demand from buyers.”

There were 86,630 home sales in July, according to the latest figures from HM Revenue and Customs, which was a 12% fall on the same month a year earlier.

“Brexit has slammed the door on the property market’s fingers, leaving a crack through which only modest price growth can be achieved,” said Lucy Pendleton, director of estate agents James Pendleton.

The Halifax survey is based on its own mortgage lending data, and the methodology has just been updated for the first time in more than 30 years to reflect the modern housing stock.

It also creates a UK average which might not be reflected regionally, with some areas seeing steady house price growth while others see property values falling.