CBD oil products ‘could be off the shelves in a year’ 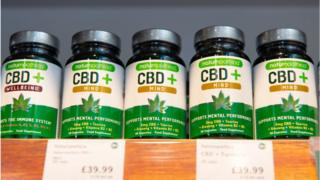 Oils, snacks and drinks containing the cannabis extract cannabidiol (CBD) will be “taken off the shelves” next year if they do not gain regulatory approval.

The Food Standards Agency (FSA) said products had to be registered by March 2021 or they would be pulled.

Despite rising sales of CBD goods, not one product has been approved in the UK yet, raising safety concerns.

The FSA has also issued new advice on CBD use, saying it should not be used alongside other medication.

Cannabidiol is derived from cannabis but does not have any psychoactive properties. It is sold in some pharmacies and health food shops as a supplement and used to treat conditions such as pain or insomnia.

However, the FSA only began regulating the market in January last year and some argue it has dragged its feet.

Trials have found CBD products on sale that contain unlisted and potentially hazardous ingredients, or illegal levels of tetrahydrocannabinol (THC), the psychoactive ingredient in cannabis.

Many may contain little or none of the extract itself, contrary to their marketing claims and despite their high prices.

The FSA said producers had been slow to submit their products for approval, forcing it to impose the deadline.

“The CBD industry must provide more information about the safety and contents of these products to the regulator by March 2021, or the products will be taken off the shelves,” boss Emily Miles said.

CBD products have been on sale in the UK for years, so the FSA has not been quick out of the blocks to act. But the stance it has now taken is a strong one.

It had been hoping individual companies would come forward with product information. But as none provided enough documentation, the regulator is now forcing them to – or threatening to take them off the shelves. For companies hoping for a slice of the UK’s multi-million pound CBD industry, that’s a big incentive to comply.

The new advice to consumers, that CBD oil should not be taken alongside any other medication, will come as shock to many who have turned to these new oils, drops, foods and supplements to help them with medical problems.

Although CBD products are not allowed to make any health claims, many people say they help with everything from mental health problems to coping with cancer treatments – so they are likely to be taking them alongside other medicines.

‘Not safe for pregnant women’

The FSA also told healthy adults to “think carefully” before taking CBD, and then not to take more than 70mg a day. That equates to about 28 drops of 5% strength CBD oil.

Those who are pregnant, breastfeeding or taking any medication are advised not to use CBD products at all.

The regulator based its recommendations on advice from the government’s Committee on Toxicity (COT), which has found evidence of “potential adverse health effects” from CBD.

But COT said it “still does not know enough to be sure about such a risk”.

“We believe that this will elicit the safety studies that are vital to build consumer confidence and help develop a socially responsible and sustainable industry.”

The FSA’s advice will apply in England, Wales and Northern Ireland but not Scotland which is covered by a separate regulator.

It does not cover CBD cosmetics and vaping products, or cannabis used for medicinal purposes, which are also subject to different rules.