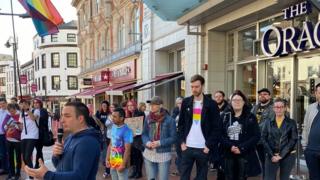 Campaigners outside the Reading shopping centre

US fast-food chain Chick-fil-A has changed its charitable giving policies, which had been criticised by LGBTQ activists.

The restaurant company did not explain the decision except to say it wanted to offer “more clarity” about its donations.

The firm said its giving will now focus on education, homelessness and hunger.

Leaders in Boston, New York and other cities have spoken out or proposed to ban the family-owned company, which boasts about 2,400 outlets across North America.

Last month, the landlord of the chain’s first UK outpost, in Reading, said it would not renew the shop’s lease after a protest by LGBT rights campaigners.

Mr Cathy has said previously that he regretted taking a public stance on same sex marriage, though he has not recanted his view, which he tied to his Christian faith.

Chick-fil-A had also already stopped donations to a slew of groups that had campaigned against same-sex marriage.

On Monday, it said its charitable arm would take a “more focused” approach and revealed recipients of $9m in 2020 donations.

The list did not include two organisations – the Fellowship of Christian Athletes and the Salvation Army – that had continued to draw fire.

The Fellowship of Christian Athletes, which received $1.65m in 2018 for youth sports camps at historically black colleges, did not respond to a request for comment.

The organisation asks participants to adhere to a sexual purity policy that bans homosexual relations and sex outside of marriage.

The Salvation Army, which received $115,000 last year, said it was “saddened” to learn of Chick-fil-A’s decision and disputed the claim that its policies are hostile to the LGBTQ community.

“We serve more than 23 million individuals a year, including those in the LGBTQ+ community,” the charity said. “We … greatly appreciate those partners and donors who ensure that anyone who needs our help feels safe and comfortable to come through our doors.

“They surrendered to anti-Christian hate groups” in a bid for more money, he wrote on Twitter.

Chick-fil-A did not elaborate on the decision to stop funding the two groups, except to say that its charitable arm had fulfilled multiyear commitments to both groups that ended in 2018.

The company said both faith-based and non-faith based organisations would be eligible for future donations.

GLAAD, a gay rights group that has campaigned against the chain, said the announcement should be greeted with “cautious optimism”.

However, it said it remains concerned about ties between the Cathy family’s private foundation and Focus on the Family, which opposes same-sex marriage. The chain also still lacks policies to ensure a safe workplace for LGBTQ staff, it said.

“Chick-fil-A … should unequivocally speak out against the anti-LGBTQ reputation that their brand represents,” said Drew Anderson, GLAAD’s director of campaigns and rapid response.