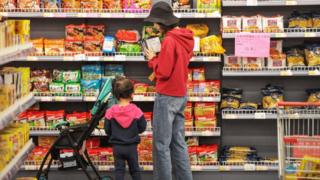 China’s economy grew at its slowest pace since the early 1990s in the third quarter, official figures showed.

In the three months to September, the economy expanded 6% from a year earlier, falling just short of expectations for 6.1% growth.

The slowdown comes as China battles a raft of economic challenges including a damaging trade war with the US.

The government has moved to boost the economy with various measures including tax cuts.

The 6.1% year-on-year growth rate was the slowest pace of expansion since at least 1992, according to Reuters data.

The result is still within the government’s target range for annual growth of between 6% to 6.5%.

The strength of the Chinese economy is closely watched as slowing growth can have far-reaching consequences for the global economy.

Earlier this year Beijing announced plans to boost spending and cut billions of dollars in taxes in an effort to support the economy.

It has also moved to provide a liquidity boost by reducing the amount of cash banks must hold in reserve.

Any analysis of China’s economic data has to come with a caveat: Many economists believe the actual figures are much lower than what we are told, but it’s the trajectory of growth and signalling from the government that you should pay attention to.

The fact that the growth figures have come in below market expectations is an indication that China’s economy is hurting more than many thought.

There were signs from Chinese officials that these numbers were going to be worrying. Earlier this week, Premier Li Keqiang told provincial heads that they needed to do “everything” to make sure they hit growth targets for this year.

The US-China trade war has dampened business sentiment, and hurt Chinese factories trying to sell their goods to the United States. That’s weighed on China’s consumers, who aren’t spending as much as they used to because they’re worried about their economic future. Add to that the rising costs because of sky high pork prices and it’s not a pretty picture.

All of these are big headaches for China’s policy makers who are trying to manage this slowdown. China’s political stability depends on economic security – and over the last forty years of growth, that’s what the Communist Party has delivered. They’re under pressure to keep that contract.