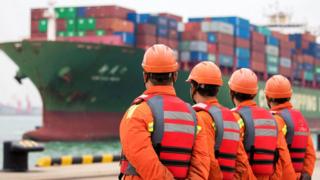 China’s exports fell in November as shipments to the US slowed sharply, adding to concerns about the effects of the two nations’ trade war.

Exports to the US were down 23%, the worst such result since February and the twelfth monthly decline in a row.

Another round of US tariffs on Chinese goods is due next Sunday, as part of the ongoing trade dispute.

On Friday, White House economic adviser Larry Kudlow said the 15 December deadline – to impose a new round of tariffs on some $156bn of Chinese exports – remained in place.

A quick guide to the US-China trade war

Beijing and Washington are negotiating a potential deal aimed at de-escalating their trade dispute but so far have failed to agree on details.

Economists say that even if negotiations aimed at avoiding the new American duties are successful, many US buyers will have already found alternative suppliers.

US President Donald Trump said on Thursday that trade talks are “moving right along”.

But China says existing tariffs must be scrapped as part of any interim deal.

The 17-month-long trade war has increased the risks of a global recession. China’s policymakers may seek more stimulus measures after growth in the economy cooled to near 30-year lows.

China’s trade surplus with the rest of the world fell, but was still more than $38bn for the month.