China to cut import tariffs on pork and tech parts 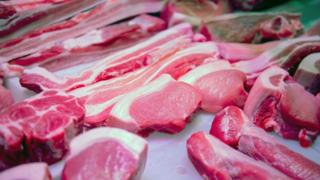 China will cut tariffs on hundreds of products ranging from frozen pork to high-tech parts next year, lowering trade barriers to support the economy.

In a statement, Chinese authorities said import tariffs on 859 items would be reduced from 1 January.

China is fighting a long-running trade war with the US and faces a series of domestic challenges.

The ministry of finance said the tariff changes would be made to “increase imports of products facing a relative domestic shortage, or foreign speciality goods for everyday consumption”.

That includes tariff rates on frozen pork – due to be lowered to 8% from 12% for some countries – as China struggles to cope with an outbreak of African swine fever.

The deadly disease has wiped out about half of the country’s pigs and dealt a heavy blow to the pork industry.

Beijing is struggling to fill a huge supply gap of the popular meat and rein in prices.

Other imports that will see a drop in tariff rates include frozen avocado and some wood and paper products.

China will also eliminate tariffs on certain asthma and diabetes medications, as well as on some semiconductors.

The lower tariffs will benefit many of its trading partners, including New Zealand, Peru, Singapore and Pakistan.

Authorities will reduce the rates by implementing temporary import tariffs – which are lower than the standard rates – on its list of targeted goods. The country made a similar move last year.

Though not directly related to its trade war with the US, the tariff cuts back up China’s claim that it is pushing to open its economy.

Earlier this month, Beijing and Washington struck a preliminary deal on their long-running trade dispute.

The US agreed to cut some tariffs in exchange for more Chinese purchases of American agricultural products.

The country is also battling a wider economic slowdown, with growth languishing at its slowest pace in about three decades.