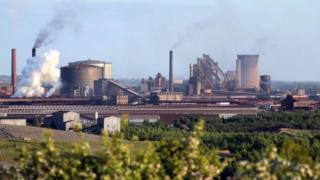 China’s Jingye Group has emerged as the frontrunner to buy British Steel out of insolvency, according to reports.

A possible deal has emerged after a preliminary offer from Turkish company Ataer faltered in late October, leaving the company in limbo.

Since May, British Steel has been kept running by the government as it seeks a buyer for the business.

The Official Receiver, which is handling the insolvency process, declined to comment.

Some 5,000 jobs hang in the balance at British Steel’s Scunthorpe plant, and another 20,000 in the supply chain.

Jingye Group, which also makes steel, is reportedly looking to reach an agreement in principle by this weekend.

Mr Percy said he had been assured that if Jingye succeeds in buying British Steel, it would protect the company.

“They have assured us that if they do progress with this acquisition, they have every intention of investing to expand production to serve the UK and European market,” he told the Grimsby Telegraph.

“That’s really important and what they wanted from us was assurance from the government and the council about support we could give and we said we are committed to work together for that.”

British Steel was put into compulsory liquidation in May after rescue talks with the government broke down.

Ataer – which is a subsidiary of Turkey’s state military retirement scheme Oyak and owns 50% of the country’ biggest steel producer – signed a preliminary agreement to buy British Steel in August.

But hopes faded in October when the Official Receiver said the parties had failed to agree terms.

There is no guarantee an agreement will be struck with Jingye, which has returned to the bidding process after having previously pulled out.

If an offer is formally tabled it would also take weeks of legal work and administration to finalise.

According to the Financial Times, the Chinese firm would aim to increase production at Scunthorpe from 2.5 million tonnes each year to more than 3 million.

It also wants to upgrade the plant and improve efficiency, although it reportedly views cutting costs as crucial as well.

Jingye was founded in 1994 and has 23,500 employees. Along with steel it also owns interests in hotels, chemicals and real estate.It is not the only bidder left in the race for British Steel. UK-based industrial metals conglomerate Liberty House is considered to be an outside contender.

Talks with Ataer are also continuing, the Official Receiver said in late October.