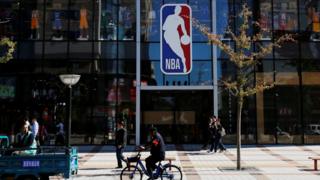 The NBA’s largest store outside North America is in Beijing

China’s state broadcaster has scrapped plans to show two US NBA basketball pre-season exhibition games, as the row over a team executive’s tweet in support of Hong Kong protesters grows.

Houston Rockets boss Daryl Morley apologised after his tweet, from which the club and NBA distanced themselves.

“We believe that any comments that challenge national sovereignty and social stability are not within the scope of freedom of speech,” the station said on its social media account.

It added that as well not showing the pre-season matches it would “immediately investigate all co-operation and communication involving the NBA”.

The matches are due to take place in Shanghai on Thursday and Shenzhen on Saturday.

Meanwhile, a publicity event at a Shanghai primary school, at which Nets players and executives were set to appear on Tuesday afternoon, was cancelled two hours before its scheduled start. No explanation was given for the cancellation.

In a statement on Monday, the NBA described Mr Morey’s comments as “regrettable” and acknowledged he had “deeply offended many of our friends and fans in China”.

It added: “We have great respect for the history and culture of China and hope that sports and the NBA can be used as a unifying force.”

However, on Tuesday NBA commissioner Adam Silver appeared to back the Houston coach. He told a Chinese news agency that his organisation wanted to make it clear that “Daryl Morey is supported in terms of his ability to exercise his freedom of expression”.

Mr Silver added: “I accept that it is also Chinese government’s and Chinese businesses’ right to react to those words and, at least from my long-time experience in the NBA, it will take some time to heal some of these issues.”

A number of NBA teams, including the Rockets (in red) have worn uniforms with Chinese characters to help promote the game in China

In response to criticism of the NBA’s initial response to the incident, Mr Silver added in a statement: “I recognise our initial statement left people angered, confused or unclear on who we are or what the NBA stands for.

“Over the last three decades, the NBA has developed a great affinity for the people of China. We have seen how basketball can be an important form of people-to-people exchange that deepens ties between the United States and China.

“It is inevitable that people around the world – including from America and China – will have different viewpoints over different issues. It is not the role of the NBA to adjudicate those differences.

“However, the NBA will not put itself in a position of regulating what players, employees and team owners say or will not say on these issues. We simply could not operate that way.”

NBA games draw huge numbers of viewers in China, with millions watching games primarily through streaming platforms. In May this year, the NBA opened its largest store outside North America in Beijing.