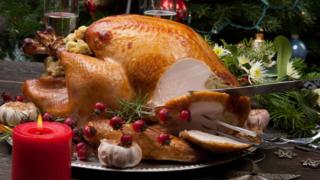 The traditional Christmas dinner is likely to make a bigger dent in your wallet this year, because supply issues have pushed up prices.

Fewer turkeys have been hatched this year after high summer temperatures reduced the number of eggs, according to business consultancy CGA.

Meanwhile, wet weather and floods have hit supplies of vegetables such as Brussels sprouts and potatoes.

It said the risk was supermarkets could pass on the higher costs to consumers.

“Problems with production this year have accelerated inflation in the turkey market in particular,” CGA said

It said some former turkey producers had got out of the business altogether, preferring to rear chickens instead.

“From a turkey perspective, the vast majority of sales take place over Christmas, which has caused producers to move to a more profitable alternative in chicken,” said Fiona Speakman, CGA’s client director for food and retail.

“This has been compounded by bad weather impacting egg yield, meaning that turkeys are at a premium,” she told the BBC.

Christmas ham is expected to be more expensive as well, because large numbers of pigs have been culled in an effort to halt the global spread of African Swine Fever.

“The pressure on supply means whole-pig prices rose by more than 10% between March and October,” CGA said.

It says it has seen a “relentless” rise in food and drink inflation over the past three years.

In the past 12 months alone, it says food and drink prices have gone up by 6.77% – more than four times the official Consumer Prices Index inflation rate of 1.5%, as measured by the Office for National Statistics.

The difference suggests operators and retailers have largely absorbed the higher costs.

Prestige Purchasing’s chief executive, Shaun Allen, said the price rises for turkey and ham could lead to a surge in demand for other meats at Christmas, such as beef.

He added: “The increasing costs on a number of traditional Christmas dinner items will be extremely unwelcome and will put pressure on margins for both operators and retailers in order to keep the costs down for customers over the festive period.”

Separate research by CGA indicates that more people are eating out during the Christmas period, with 70% of consumers visiting a restaurant over December.

“Set menus and Christmas promotions often add further value to meals,” said Ms Speakman, “not to mention the time saved on shopping, cooking and all that washing-up.”