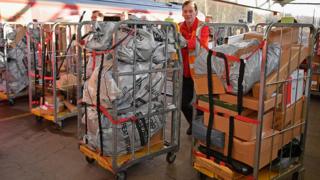 Royal Mail expects 2 January, the first working day of the year for postal workers in the UK, to be the busiest for returning unwanted Christmas gifts.

Returns on “Takeback Thursday” were expected to be 72% higher than the average day in December.

It said most people will send back their unwanted and ill-fitting Christmas presents on that day.

And three in five of those shoppers said they may not use a retailer again if they have a bad returns experience.

“With the festive season now over, January is the busiest time of the year for returns,” Royal Mail said.

The average consumer in the UK returns an item bought online about once a month, the company found in a study.

It showed that people would buy more online where a “try before you buy” option is available.

Sarah McVittie – co-founder of Dressipi, which uses data to help retailers better manage their returns and predict what customers will like – told the BBC that returns were a “natural cost” of doing business online, especially for clothing.

“You don’t always know what it looks like, feels like, how it hangs on you,” she said.

As a result, return rates for online retailers range from about 30% to as high as 50%, she told Radio 5 live’s Wake Up to Money.

That compares to between 5% and 10% of items bought in store.

Laura Foll, a fund manager at Janus Henderson Investors, said some online retailers reported that customers returned more items than they held on to.

She said retailers were often “coy” and tried to avoid revealing their return figures.

“But when they do, they’re really quite staggering,” she said.

Are you returning a Christmas gift by post? Email haveyoursay@bbc.co.uk.