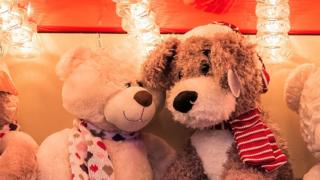 The industry has had little to cheer throughout 2019

Toy sales in the UK fell by 6% for a second year in a row in 2019 as politics overshadowed the traditional festive buying season.

The general election in December and Brexit uncertainty during the rest of the year affected consumers’ confidence, the industry said.

This meant parents were less likely to impulsively buy a new toy for their children, a key driver of the market.

Spin-offs from big feature films also failed to turn around a poor 12 months.

The UK toy market is the fourth largest in the world, behind the US, China and Japan.

In contrast in Europe, sales were flat in France and rose by 3% in Germany, where the market is now only slightly smaller than in the UK.

Sales in the UK have now seen three years of decline in a row, with Natasha Crookes, from the British Toy and Hobby Association, blaming the latest downturn on the effect of politics on consumer confidence.

A number of Brexit deadlines meant people were not buying freely, having already been making fewer trips to the High Street.

Then, a general election campaign in November and December “wasn’t helpful”, she said, as it created further uncertainty for shoppers during the crucial build-up to Christmas.

She said 2020 should be stronger but it was hard to predict a return to growth with the UK’s future relationship with the EU still a matter of negotiation.

Ms Crookes called for certainty for business, pointing out that the association had produced four different versions of guidance for its members over Brexit already.

She said the toy sector hoped UK and EU rules remained “aligned for as long as possible”, but the industry was also keen to see what any future trade agreement with the US might look like.

Are we less generous to our children?

Sales in 2019 were also affected by the way that people buy toys, according to Frederique Tutt, global industry analyst as NPD.

“The toy market is no exception to other retail sectors and is in a transition period, adjusting and recovering from a challenging 2019,” she said.

She said that 37% of toys were bought online – a growing proportion.

These tended not to be the impulsively bought pocket money priced, collectable toys of £5 or less which had helped drive the market in previous years.

The hope in the sector was that toys linked to major film releases would prop up the market in 2019.

Ms Tutt said the fragmentation of entertainment, previously concentrated on big films but now including TV streaming, computer games and online video, meant such releases were not always having the impact they once did.

Frozen II was released very late in the year in the UK, and did prompt strong toy sales, so the sector was hoping this continued for the first half of 2020, she added.