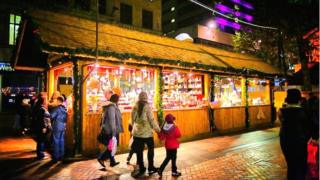 City centres across the UK will be transformed in the coming weeks as wooden stalls are erected and visitors from Europe arrive to bring a continental flavour to our streets.

Christmas markets have quickly become a familiar sight in many cities, but the uncertainty around Brexit means they have faced extra challenges this year.

Organisers brought goods over to the UK early and paid for expensive storage ahead of the previous 31 October Brexit deadline, which fell at a crunch moment in their preparations.

And there are fears that the markets – which contribute hundreds of millions of pounds to the UK’s economy – may find it harder to attract European stallholders in the future.

Anja Manke runs the stalls in St Anne’s Square in Manchester’s Christmas market. She’s been coming for 21 years – living here in the UK for at least two months a year – and considers Manchester her second home.

You can smell her stalls from the other end of the street. There are German sausages, fried potatoes, mushrooms, roast almonds and nuts, piles of neatly stacked chocolate kisses and a gluhwein bar with a singing moose on the roof.

‘Nobody knows what’s going to happen’

But to make sure her stalls are stacked this year, she’s had to do things differently.

“It looks like really nobody knows what’s going to happen, so we are trying to get everything done,” she says. “We don’t know how long it’s going to take to get deliveries, so its better to have everything in place just to be on the safe side.”

That’s a story being repeated by hundreds of European traders running the UK’s Christmas markets this year. The BBC has contacted six of the UK’s biggest continental Christmas markets – Birmingham, Leeds, Manchester, Belfast, Glasgow and Oxford – and found they have carried out extra preparations and storage, shipped goods early, or even lost business because of the timing of the previous October deadline.

These markets aren’t just about European traders making money here and then heading home. According to research by the Local Government Association, Christmas markets bring visitors into cities from further afield, encourage spending in bars, restaurants and hotels, and contributed as much £500m to the economy in 2017.

Because Anja has to buy her goods in euros, she’s worried that if the pound falls further because of Brexit, it will make trading even harder this year and in the years ahead.

“We are really scared that that might happen, because I think that then we will have a real problem to make the market successful… if it’s going to be more and more expensive then we also will have to calculate again.”

Kirk Stroscher has a lot on his plate at this time of year as the manager of the Christmas markets in Birmingham and Leeds. He says that given the uncertainty surrounding Brexit, he brought everything over early.

“We tried to get all our lorries over to the UK earlier than usual,” he says.

“We transport from Germany all the wooden stalls, a lot of decoration, besides all the products that we’ll be selling here the next few weeks.”

Warehouse space is hard to come by in the UK and is more expensive than usual, but Kirk says using it “was the only way to be sure to begin in time”.

Allan Hartwell runs the Christmas markets in Belfast and Glasgow, where about a third of his traders travel from Europe. He says extra planning has been the only way to cope with this year’s uncertainty.

“And it is about that authenticity… that’s what the public want to see.”

Allan says most of the traders heading to the Belfast Christmas market will bring their stock through Britain, so have been concerned they could face a double load of paperwork or regulations – once to get into the UK, and then again when crossing to Northern Ireland.

Like most European traders, he’s relieved that the Brexit extension makes that unlikely this year.

Allan thinks the biggest impact on the markets this year will be whether consumers are confident enough to spend.

However, he thinks disruption “will certainly come next year as regulations are introduced as part of the new process… a lot of traders will be reconsidering their position”.

Anja and Kirk agree that if the UK ends up with a no-deal, or hard, Brexit, European stallholders will be put off travelling to the UK’s markets next year. And that not only means less gluhwein and Christmas cheer, but potential damage to our winter economy.