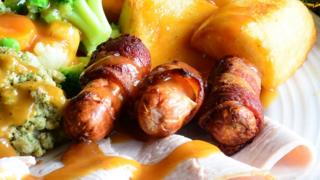 Pigs in blankets and other festive meal treats might be in short supply this Christmas, the British Meat Processors Association has warned.

It says 60% of the labour force in UK meat plants comes from other countries and the industry is not attracting enough seasonal EU workers.

Its chief executive, Nick Allen, told the BBC that wrapping cocktail sausages in bacon was done by hand.

He said the job was “fiddly and hard to mechanise”.

The plants themselves tended to be in rural areas where there was low unemployment, he added.

“Ever since Brexit happened, it’s become hard to hold on to European labour,” he said.

The sharp fall in the value of the pound had amounted to a reduction in wages for them, he added, while “the message coming out of the UK is not exactly welcoming”.

But he added: “It’s not just a Brexit issue.” The working conditions in meat plants, including the low temperatures need to preserve the meat, made it hard to attract workers, while demand for seasonal labour was naturally higher in other sectors too, especially delivering Christmas cards and parcels.

Its members are responsible for supplying fresh meat and meat products to retailers, restaurants and food service companies throughout the UK.

The industry employs about 75,000 people and is worth more than £7bn a year to the British economy.