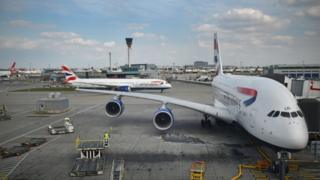 It could mean extra annual emissions equivalent to that of a large town.

BA said it was common to carry extra fuel for “operational, safety and price reasons”.

Cost savings made on a single flight can be as small as just over £10 – though savings can run to hundreds of pounds.

Researchers have estimated that one in five of all European flights involve some element of fuel tankering.

The practice on European routes could result in additional annual greenhouse gas emissions equivalent to that produced by a town of 100,000 people.

Critics say the widespread use of the practice undermines the aviation industry’s claims that it is committed to reducing its carbon emissions.

John Sauven, Greenpeace UK’s executive director, told the BBC this was a “classic example of a company putting profit before planet”.

He added: “This is why we can’t afford another decade of believing corporate greenwash and waiting for the voluntary carbon reductions to appear.

“We need tough regulations to limit aviation’s emissions, because so long as there’s money in polluting, they’ll pollute as much as they can.”

International Airlines Group (IAG), the company that owns BA, says it wants to be the world’s leading airline group on sustainability.

BA boasts it even prints its in-flight magazine on lighter paper to save weight.

Yet BBC Panorama has seen dozens of internal BA documents that show up to six tonnes of extra fuel have been loaded onto planes in this way. It has also seen evidence that Easyjet carries extra fuel in this way.

Airlines can save money from the fact that the price of aviation fuel differs between European destinations.

BA insiders say the company – like many airlines running short haul routes in Europe – has computer software that calculates whether costs can be saved by fuel tankering.

The software will calculate whether there is a cost saving to be made. If there is, crews load up the extra fuel.

An example of documents seen by Panorama show that a recent BA flight to Italy carried nearly three tonnes of extra fuel.

The extra weight meant the plane emitted more than 600kg of additional carbon dioxide – the same emissions one person is responsible for on a return flight to New York.

The cost saving on that trip was less than £40, but the documents Panorama has seen show that it can be even lower than that.

A BA insider described the practice as “hypocritical”.

“For such a big company to be trying to save such small amounts while emitting so much extra CO2 seems unjustifiable in the current climate,” he said.

BA said it was common practice for the airline industry to carry additional fuel on some flights.

The airline said for BA this applies mainly to short-haul destinations “where there are considerable price differences between European airports”.

It said the additional emissions from the airline represented approximately two per cent of the total extra emissions generated by all airlines tankering fuel in Europe, based on research by Eurocontrol.

BA pointed out that since 2012 all flights within Europe are covered by the EU Emissions Trading System.

It added that from 2020 the company will offset all CO2 emissions from its UK domestic flights.

Easyjet said it has reduced the level of tankering in recent years and that it only takes place on a tiny proportion of flights for operational and commercial reasons.

Eurocontrol, the body which coordinates air traffic control for Europe, has calculated that tankering in Europe resulted in 286,000 tonnes of extra fuel being burnt every year, and the emission of an additional 901,000 tonnes of carbon dioxide.

Eurocontrol described the practice as “questionable” at a time when aviation is being challenged for its contribution to climate change.

But the BA whistleblower said: “I’ve been a BA employee for a long time.

“I’m very proud to be part of BA but in all honesty it makes me sad and disappointed.”