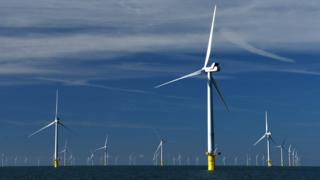 A record amount of new offshore wind power has been announced in the UK – at record low prices.

The new projects will power more than seven million homes for as little as £39.65/MWh.

Environmentalists are delighted – but they warn minsters are failing to tackle more difficult challenges such as driving and home heating.

They point out that electricity usage forms just 15% of household energy consumption – way behind petrol, diesel and gas.

The £39.65 figure offered by the cheapest operator is way lower than previously expected.

The cost of offshore wind has plummeted around 30% in the last two years.

She tweeted: “Two years ago I nearly fell off my chair at the low cost of new offshore wind power. I was more sanguine this time… then it happens again.”

For more facts about how our energy consumption needs to change to help fight climate change, download your BBC Briefing on energy. BBC Briefing is a new mini-series of online guides to the key issues in the news.

Prime Minister Boris Johnson said: “The UK is leading the way in the fight against climate change, and it’s great news that millions more homes will be powered by clean energy at record low prices.

“Seizing the opportunities of clean energy not only helps to protect our planet, but will also back businesses and boost jobs.”

His critics point out that de-carbonising the electricity sector is accepted as the easy part of tackling climate change.

The government the has been repeatedly criticised by MPs for failing to curb emissions from transport and homes – and for not acknowledging that to curb climate change, many drivers need to leave their cars at home and walk, cycle or go by public transport.