Clintons in survival talks over shop closures and rent cuts 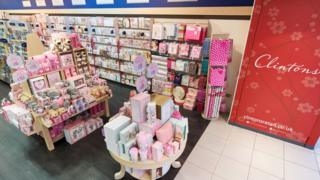 The retailer, which has about 2,500 staff, is in restructuring talks with landlords in another sign of the High Street crisis.

A spokeswoman told the BBC no decisions have yet been made.

Clintons was responding to reports on Sunday that it wanted to close 66 out of 332 shops, with landlords slashing rents on most of the other stores.

The restructuring would involve a controversial scheme known as a company voluntary arrangement (CVA), an insolvency process that allows companies to continue trading while pushing through closures and rent cuts.

A Clintons spokeswoman said “discussions are continuing with our landlords but no decisions have been made”.

But she declined to comment on a Sunday Telegraph report that the company told landlords 90 of its shops were loss-making and that sales were expected to continue to decline.

One landlord told the BBC that although there was a meeting with Clintons last week, very few details of the restructuring plan were given. More talks are expected this week.

The Sunday Times said landlords would have until 20 December to air their objections to a CVA. However, landlords have taken an increasingly tough stance on the growing use of CVAs and are more prepared to fight demands for rent cuts.

The retailer, formed in 1968, is owned by the Weiss family, which previously controlled the American Greetings retail chain in the US.

Clintons, previously known as Clinton Cards, had appointed advisers from consultancy KPMG to explore a potential sale, but it is thought no acceptable offers were received.

Mothercare is part of a long list of High Street names to go under, including Maplin and Poundworld. Others, including Homebase, Debenhams and Carpetright, have been forced into restructuring.

A string of restaurant chains have also closed amid a squeeze on consumer spending.

Retail experts expect more pain, however, as firms approach the make-or-break Christmas trading period. It is common for banks to wait until they have a clearer picture of Christmas and New Year sales before pulling the plug on retailers.