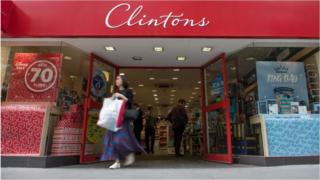 Greetings card retailer Clintons has struck a deal that will stop it going bust this Christmas, administrators KPMG have said.

The firm will be salvaged through a complex transaction that allows it to be sold back to its existing owners.

Boss Eddie Shepherd said he was pleased to have secured the firm’s future ahead of the “crucial” Christmas trading period.

“Like so many of our fellow High Street retailers, we have worked tirelessly to contend with the maelstrom of issues impacting the sector, from business rates pressures, to fragile consumer confidence and the lack of clarity around the taxation of online retail businesses,” he said.

“We are confident that this deal will kickstart a new chapter for our business.”

Clintons had initially tried to find a new buyer for its ailing business, but it is thought no acceptable offers were received.

It then explored a company voluntary arrangement (CVA) – a strategy that would have allowed it to shut under-performing stores and cut rents on others.

But it was was unable to get the support it needed from landlords.

Instead the company has effectively bought itself out of administration.

In what is known as a pre-pack process, the firm has removed its debt and secured breathing room to start negotiations with landlords afresh. However, there is no guarantee this will secure its long term future.

Clintons, previously known as Clinton Cards, was formed in 1968, and has been owned by the Weiss Family since 2012.

A string of retail chains in the UK have closed over the last few years amid a squeeze on consumer spending.

Others to have gone under include electronics retailer Maplin and discount chain Poundworld, while Homebase, Debenhams and Carpetright have all been forced to restructure.