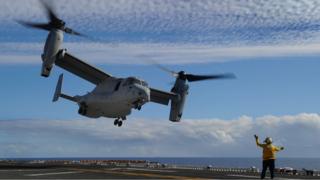 The government is to intervene in a US private equity firm’s takeover of UK defence and aerospace firm Cobham, citing national security concerns.

Advent International made a £4bn offer to buy Cobham in July and shareholders approved the deal last month.

But Cobham’s founding family raised concerns about the company’s future and its connections with UK defence.

“Following careful consideration of the proposed takeover of Cobham, I have issued an intervention notice on the grounds of national security,” said Business Secretary Andrea Leadsom.

The Competition and Markets Authority (CMA) will investigate and carry out a review on the national security implications of the transaction.

It must report the results of its decision by 29 October.

The defence technology firm has had a rocky time after issuing a series of profit warnings in 2016 and 2017, which required it to raise funds from its shareholders.