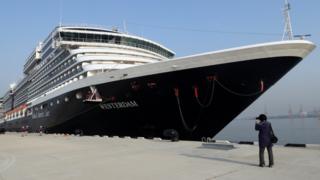 A cruise ship carrying more than 1,450 passengers has been told it cannot dock in Thailand over coronavirus fears.

The Westerdam had already been turned away from several ports, including in Japan, Taiwan, Guam and the Philippines, amid fears of the virus.

Holland America, which owns the ship, said it had “no reason to believe” anyone on board has the virus. It had planned to dock in Bangkok on Thursday.

But on Tuesday the Thai government said permission had been “refused”.

It added that, while the ship would not be allowed to disembark, Thailand would “gladly help providing fuel, medicine, and food” to the vessel.

Westerdam is sailing for Bangkok, Thailand, where the current cruise that departed Feb. 1 will end on Thursday, February 13. Guests will be disembarking in Laem Chabang and transferring to Bangkok for their forward travel home. Full update here >> https://t.co/O2OYLtb3WP

Holland America, which is owned by the cruise giant Carnival, stressed its ship was not in quarantine and said it was “actively working” on a solution.

“We know this is confusing for our guests and their families and we greatly appreciate their patience,” it said.

Some passengers took to Twitter to express their frustration, complaining that they had first learnt they been rejected from Bangkok from media reports.

Others complained of the lack of notice they had been given in order to cancel return flights to their countries of origin.

However, some said they were taking the opportunity to make the most of the food and entertainment on board.

The Westerdam left Hong Kong on 1 February on a 14-day cruise around Taiwan and Japan. Its final destination was meant to be Yokohama in Japan but the port refused it permission to dock.

On Tuesday morning the ship was sailing about 60 miles off the southern coast of Vietnam, according to marine traffic data.

The coronavirus has killed more than 1,000 people – all but two in China – and infected more than 40,000, again most in China. There have been 319 cases in 24 other countries and territories as officials work to contain its spread.

Another cruise ship, the Diamond Princess, with 3,700 passengers and crew on board, is quarantined in Yokohama, with 135 cases of coronavirus detected on the vessel.

The World Dream cruise ship was held up in Hong Kong for days after it was linked to three cases, but all passengers and crew later tested negative and were allowed to disembark.