Coronavirus: Could it damage the global economy?

January 26, 2020 by Joshua Marshall No Comments 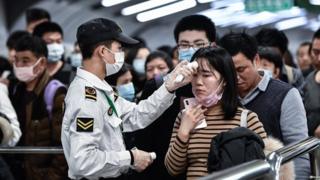 China is struggling with a new virus that has already killed more than 20 people.

It is a serious health issue. The World Health Organization has called it an emergency for China, though not for the world, not so far at least.

Inevitably, it will have economic consequences. But how severe and how far will they spread?

Economists are very wary about putting any figures on it at this early stage.

But it is possible to identify what form the impact will take and to look at the economic damage done by previous similar episodes, notably the outbreak of severe acute respiratory syndrome – better known as Sars – in 2002-3, which also began in China.

It is within China that there already is some economic damage. Travel restrictions have been imposed in parts of the country at a time [the Chinese New Year] when many people travel. So the tourism business is already being hit.

Consumer spending on entertainment and gifts will also be affected. For entertainment, many will be reluctant to take part in activities outside the home that could lead to exposure to the virus. Many people are sure to have cancelled plans of their own volition to avoid risks of exposure to the disease.

The impact is magnified by the fact that Wuhan, the city where it began, is an important transport hub.

Travel restrictions are also a problem for any business that needs to move goods or people around. Industrial supply chains will be affected. Some deliveries may be disrupted and some will become more expensive.

There will be lost economic activity as a result of people not being able or willing to travel to work.

There will also be a direct financial cost from treating patients borne by health insurers (public and private) and by patients.

Outside China, much will depend on the spread of the disease. If there are outbreaks elsewhere some of the same effects may be apparent, although almost certainly on a much smaller scale.

The extent of these effects will depend to a large degree on how easily transmissible the virus proves to be and the death rate among those infected. Encouragingly many people so far have made full recoveries, though there have been tragic exceptions.

It is often the case that economic problems are quickly reflected by financial markets, where traders’ views about what assets are worth are affected by their expectations about future developments.

On this occasion that have been some negative consequences for stock markets, particular in China. But they have not been large. Even the Shanghai Composite Index is higher than it was six months ago.

There are some businesses who could gain, such as drugs makers. What is immediately available is symptom relief. In the longer term there might be profitable opportunity in developing a vaccine against the virus.

Paul Stoffels, chief scientific officer at Johnson & Johnson told the BBC that his teams had already done the “basic work” on a vaccine. He thought it could be available in about a year.

There has also been a surge in demand for surgical masks and gloves to protect against becoming infected. Shares in Chinese companies that make these items – drugs and protective equipment – have seen some sharp price rises.

The best historical example to give guidance is probably the Sars outbreak.

Jennifer McKeown of Capital Economics, a London based consultancy, suggests that global growth was a full percentage point weaker in the second quarter of 2003 than it would have been without Sars. That is quite a substantial hit, but she also says it made up the ground quite quickly afterwards.

She says the picture is complicated by other factors that affected global growth at the time but she concludes “it is very hard to pick out any lasting damage to global GDP (economic activity) from Sars, which was an unusually severe and widespread virus”.