Coronavirus: Much of ‘the world’s factory’ still shut 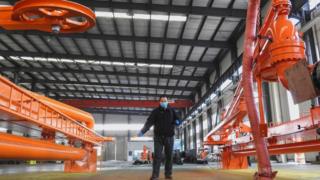 A worker disinfecting machines before workers return from their holidays in China’s eastern Jiangsu province.

A large number of China’s factories remain closed today even as millions of people to return to work after the Lunar New Year holiday was extended due to the coronavirus.

The shutdowns are having a major impact on the world’s second largest economy and global supply chains.

Some global car makers now face the threat of a shortage of parts.

There are also concerns about supplies of Apple products as the disruptions continue.

Employers across China had been ordered to remain closed after the annual holiday as part of an attempt by authorities to stem the spread of the virus.

For many companies those restrictions have now been removed, although several major manufacturers remain closed.

Foxconn, which is a major supplier to Apple, has yet to reopen its largest Chinese factory. Shenzhen’s Longhua district, where the plant is located, has said production would restart as soon as officials have completed inspections at the facility.

The company did not immediately respond to a request for comment.

Last week as Foxconn was pushing for permission to restart operations it said that hundreds of thousands of workers at its factories would wear surgical masks to prevent infection and undergo regular temperature checks.

Several major car makers are also among the manufacturers that have extended the shutdowns of their operations.

Nissan and PSA, which makes the Peugeot and Citroen brands, have said their factories will remain closed until Friday.

VW, BMW, Toyota and Honda have all said they now plan to restart Chinese production next week.

At the same time French car parts maker Valeo will keep its three sites in Wuhan shut until at least 13 February.

With many car parts manufacturers remaining closed in China, the virus is likely to hit the global motor industry particularly hard.

Hubei province, where the outbreak is thought to have started and is now in lock down, is . Honda, General Motors, and Dongfeng Motor all have factories in the region. One of Honda’s two Chinese joint venture manufacturing plants is in Wuhan, the capital city of Hubei.

Last week South Korea’s Hyundai became the first major car maker to halt production outside China because of a shortage of parts caused by the coronavirus.

Fiat Chrysler also warned that it may have to suspend production in Europe as it struggles to get enough components from China.

On Friday Suzuki said it may start sourcing parts from outside China over concerns that the outbreak could disrupt production in India, its biggest market.