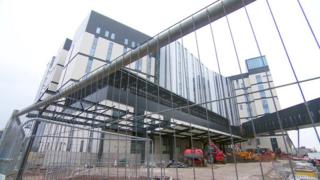 Costs of building two new hospitals that stalled with the collapse of engineering giant Carillion have almost doubled, auditors have found.

The Royal Liverpool Hospital is now predicted to open five years late and cost over £1bn to build and maintain.

And the Midland Metropolitan Hospital in Smethwick is due to cost at least £998m, over £300m more than planned.

The private sector has borne most of the total 98% increase, the National Audit Office (NAO) found.

Both hospitals are expected to open in 2022, although an opening date for the Royal Liverpool is yet to be set.

The construction cost of the 646-bed Liverpool hospital is now expected to come to at least £724m, compared with £350m in the original business case, said the NAO.

This includes an estimated £293m for remedial work with an additional £369m for maintaining the building for a period of 30 years, which was the term of the original PFI contract, bringing the total expected cost to £1,063m.

However, there were “particularly significant risks” of further cost increases and delays, as there were still “some issues which are not yet resolved”, warned auditors.

Work on both hospitals stopped in January, when Carillion collapsed

“Two desperately needed hospitals are going to be years late and in the meantime local communities are left with facilities that are no longer fit for purpose,” she said.

“The responsibility for these delays has to lie squarely at the door of the government, which consistently failed to prioritise the overriding need that these hospitals had to be built.

A government spokesperson said: “As this report shows, the private sector has borne the brunt of Carillion’s catastrophic failure to complete these two projects.

“To support staff and local communities in Sandwell and Liverpool, we’re giving both trusts the funding they need to minimise the delays caused by the collapse of Carillion and get these two new hospitals open.”

The beleaguered Royal Liverpool Hospital has been repeatedly delayed and is now expected to be completed in autumn 2022.

The unattended site in Smethwick has deteriorated since building work stalled.

There were significant problems during construction – including asbestos on site and cracks in structural beams – before Carillion went into liquidation in January 2018.

The new contractor had to strip out three floors of the building and start major work to reinforce the structure with steelwork and additional reinforced concrete.

The 669-bed Midland Metropolitan Hospital in Smethwick is now expected to open in July 2022 – a delay of three years and nine months.

The £709m bill to the taxpayer was up 3% from the original figure, said the NAO.

Following Carillion’s collapse, work on both hospital sites stopped while the trusts, government and private investors attempted to rescue the projects.

When these attempts failed, the government decided to terminate the PFI schemes and provide public financing to complete the hospitals.