‘Costs soar at hotel of mum and dad’ 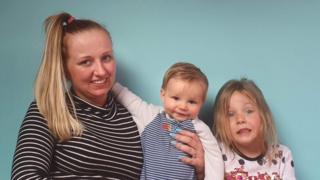 Bethany Osborne moved back in to her parents’ house with her children Oliver, 1, and Evelyn, 5, last Christmas

Bethany Osborne left home at 19, but now, at 22, she’s back in her parents’ home in Romford, using their washing machine, eating food from the fridge and watching TV on her dad’s Netflix account.

“I do my own washing if I get to the machine first. But my mum generally does it,” she admits.

The pile of dirty clothes is not just hers. She has a five-year-old and a one-year-old too.

“Buying the kids’ clothes and food – I do it sometimes,” she adds, but most of the time her mum’s got there first.

About a quarter of young adults aged 20-34 live at home, a figure which, according to the Office for National Statistics, has been growing steadily for 15 years.

Many returning adult children enjoy home comforts such as cooked meals, a full fridge and cleaning, as well as their bills being covered by the “hotel of mum and dad”, according to a survey by price comparison website MoneySuperMarket.

The average cost to the hoteliers – mum and dad – has gone up sharply, meaning parents are sacrificing luxuries and holidays, the survey found.

MoneySuperMarket found that last year, adult offspring were returning for an average of 9.7 months, while parents were incurring costs of around £895.

This year, the “kidults” were staying longer – just over 10 months – and costing their parents £1,640 as the householders shouldered the water, heating and electricity bills, as well as paying for takeaway suppers, toiletries and food.

The price comparison site surveyed 500 adults who had moved back into their parents’ home and 500 parents who had adult children back living with them.

“I think what we’re seeing is more young people with more debt, so when they’re going back to their parents’, they’re coming with higher student loans, probably credit card debt, maybe payday loans.”

“So the reason parents are paying more is they’re trying to look after their children more. If your child comes home and you see them struggling financially, you feel more awkward asking them for rent or to contribute. It tugs on your heartstrings more.”

Parents often end up doing the laundry of grown up children

The survey found that 18% of adult children said they were moving back home because of debt, compared with 8% last year.

On top of the day-to-day spending, parents reported forking out £1,886 on redecorating, buying new furniture and upgrading their wi-fi to accommodate returning offspring.

In Bethany’s case, she doesn’t have any extra debt on top of her student loans, but her relationship with her partner broke down and as a trainee nurse and she couldn’t afford to rent an apartment on her own.

With seven of them in her parents’ house (including a 20-year-old sister home from university and an 18-year-old brother still at college), there is friction over the one bathroom and who should unload the dishwasher.

But her parents seem willing, determined even, to shoulder the costs and help out, says Bethany.

“My mum feels obliged to, because it’s like when we were little. She feels the three of us – me, my brother and sister – are like her little kids still,” she says.