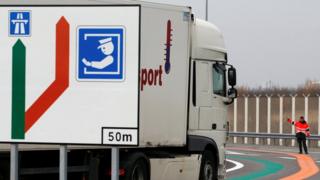 Organised criminals could exploit gaps in the UK’s border preparations in the event of a no-deal Brexit, a government spending watchdog has warned.

With two weeks to go until the UK is due to depart the EU, it warned that government departments and businesses were not fully prepared for the risks.

“Mitigating the risks could be outside of government’s control,” it warned.

The NAO’s report said it was “impossible to know exactly what would happen at the border in the event of no-deal on October 31 2019” and that would pose “new challenges” for government departments “in monitoring and responding to any disruption that may ensue.”

“This includes supporting businesses and individuals in meeting their new obligations, mitigating risks of the border becoming vulnerable to fraud, smuggling or other criminal activity, and activating civil contingency plans if necessary,” its report said.

The government spending watchdog said that the government had made progress with putting in place the systems, infrastructure and resources required to manage the border in the event of a no-deal Brexit.

Despite this, the government had been unable to mitigate the most “significant risks” to the effective functioning of the UK border in the event of no deal, it said.

The most significant risks to the operation of the border included businesses’ level of preparation, the controls imposed by EU member states and temporary arrangements made for the Northern Ireland and Ireland land border, the report found.

HM Revenue & Customs estimates that 150,000 to 250,000 traders may need to make a customs declaration on the first day after Brexit. Of that number, only 25,000 had registered so far, the NAO found.

The report also highlighted the fact that in September, the government acknowledged that the arrangements made for the Northern Ireland and Ireland land border were unlikely to be sustainable “beyond the very short term” because of “significant economic, legal and biosecurity risks”, as well as the “potential for civil unrest”.

And although the government had made contingency plans in the event that the UK left the European Union without a deal on 29 March, the watchdog said that some of those plans had not been updated since.

Is the UK ready?

Other plans, systems and infrastructure had “mostly” been developed in time for the first day after Brexit, the NAO said, however it said it was concerned that they may not work exactly as planned.

“Preparing the UK border for EU exit with or without a deal is extremely complex and has required a huge amount of work from many government departments, agencies and third parties such as traders.

“Despite their efforts, significant risks remain which may have consequences for the public and businesses,” said the NAO’s head Gareth Davies.