Crossrail boss says managers ‘have a grip’ on project 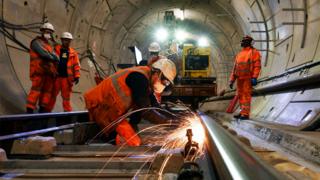 The boss of London’s Crossrail project has insisted managers “do have a grip” on the delayed project.

Crossrail, Europe’s largest transport scheme, was due to open in December 2018 but it has now been put back until 2021.

The line, between Berkshire and Essex, via central London, is set to cost £18.25bn – £2.35bn over its original budget.

In November he said up to £650m in additional money could be needed to complete the project. However, he said that would be the last budget increase.

“We do not expect to need any more money to do this and we expect this railway to open in 2021,” he said.

“Barring a very, very unexpected event, we’re going to live within our means.

“Look to the progress we’ve made, and have confidence that we do have a grip, we have a firm plan,” he added.

Mr Wild, who was appointed in November 2018, said the project was “in disarray” when he took over.

“The organisation was hollowed out,” he said.

“It didn’t have a plan. There was so much work to do. They didn’t know what the actual scope of the work was.”

He said in 2019 progress on safety issues had been “slower than expected”.

But he added his team completed work on tunnelling, tracks, overhead lines and communications systems.

The project is being funded by the Department for Transport and Transport for London.

Last month, TfL Rail took over from Great Western Railway in operating stopping trains between London Paddington and Reading, ahead of services becoming part of the Elizabeth Line, which is what Crossrail will be known as when it becomes operational.

The first part of the railway to open will be the central section, with Elizabeth Line trains running between Paddington and Abbey Wood via central London.

All stations on this section are expected to operate on the opening day except for Bond Street.

Full services from Reading and Heathrow in the west to Abbey Wood and Shenfield in the east will then commence “as soon as possible”, Crossrail Ltd said.