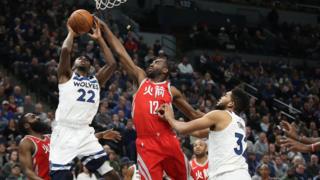 A number of NBA teams, including the Rockets (in red) have worn uniforms with Chinese characters to help promote the game in China

The general manager of the Houston Rockets basketball team has apologised after a tweet in support of Hong Kong protesters led to a Chinese backlash.

But the coach backpedalled after a fierce criticism from Chinese fans, sponsors and commercial partners.

Chinese broadcasters and streaming platforms said they would no longer broadcast Rockets games.

NBA games draw huge viewership in China, with millions watching games primarily through streaming platforms. The Rockets have been popular since the team signed Chinese star Yao Ming in 2002.

The Rockets and the National Basketball Association in the US quickly distanced themselves from Mr Morey’s tweet.

And, in a follow-up statement, Mr Morey said he had reconsidered his position. “I was merely voicing one thought, based on one interpretation, of one complicated event,” he wrote.

“I have had a lot of opportunity since that tweet to hear and consider other perspectives.

“I have always appreciated the significant support our Chinese fans and sponsors…I would hope that those who are upset will know that offending or misunderstanding them was not my intention.

“My tweets are my own and in no way represent the Rockets or the NBA.”

But the backtracking has also been criticised. Former US presidential hopeful – and Rockets fan – Ted Cruz accused the NBA of “shamefully retreating” in pursuit of profit.

Hong Kong has seen months of protests – sparked by an extradition law that has since been withdrawn – that have grown increasingly violent.

On Sunday, the Chinese Basketball Association suspended cooperation with the Houston Rockets, as did Chinese sportswear brand Li-Ning.

And Chinese state broadcaster CCTV and Tencent Holdings, which streams NBA games in China, both said they would stop broadcasting Rockets matches.

Rockets owner Tilman Fertitta tweeted that Morey didn’t speak for the team, which he said was “not a political organisation”. Rockets player James Harden said: “We apologise. We love China.”

The NBA described Mr Morey’s comments as “regrettable” and said “we have great respect for the history and culture of China and hope that sports and the NBA can be used as a unifying force”.

And, in a lengthy Facebook post, Brooklyn Nets owner Joe Tsai criticised Mr Morey for his “damaging” tweet, saying he misjudged how strongly many Chinese people felt about Hong Kong.

The Canadian, who is also the vice-chairman of Chinese ecommerce giant Alibaba, said he had “spent a good part of my professional life in China”.

“There are certain topics that are third-rail issues [untouchable] in certain countries, societies and communities,” he went on.

“Supporting a separatist movement in a Chinese territory is one of those third-rail issues, not only for the Chinese government, but also for all citizens in China.”

However, the NBA drew criticism from both Democrat and Republican politicians, who accused the organisation of bowing to Beijing instead of supporting democracy.

Mr Cruz said he was proud to see Mr Morey “call out the Chinese Communist Party’s repressive treatment of protestors in Hong Kong”.