Davos secret ranking: I’d love to see where I am 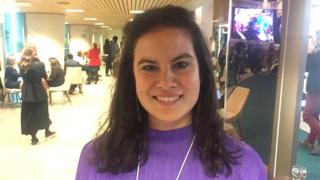 “It’s no big deal if Davos rank us in terms of importance,” says Diana Paredes, a tech entrepreneur and delegate at this week’s World Economic Forum (WEF).

She adds: “I’d love to see where I am on the list, probably low down. But I wouldn’t be offended, that’s just how life is.”

Ms Paredes is commenting on claims that the high-end conference in Switzerland categorises its most elite delegates numerically from one to seven based on their “position level”.

The news website Quartz, which published a leaked copy of the alleged list, says those ranked as “ones” are typically given labels such as “Top Executive” or “Head of State”.

“Twos” meanwhile hold positions such as “Senior Executive” or “Deputy Head of State”, and so it goes on, with those at levels six and seven classified as “honorary guests” or “functional staff”.

So far WEF has declined to comment on the claims, nor is it clear what it uses the alleged list for. But most of the elite white badge holders I speak to in the main Congress Centre say they would be neither surprised or offended if the claims were true and that it is common practice in the business world.

“If you think about having a client list, you have your clients that are super demanding or pay higher or are worth more to your firm,” a woman who runs a large US investment company tells me.

“So you’re probably going to pay extra special attention to that client versus a client providing less revenue to you.”

Another high-level investor tells me: “To the extent I am ranked I’d be curious to see how I get ranked. I wouldn’t be offended if I came lower down than I expected.”

Not everyone agrees, although no-one will go on record.

A woman working for a tech company tells me: “This just seems kind of petty to me. It feels a bit elitist and silly.”

Several top academics describe the idea as “superficial” and “unbelievable”, while one says: “I am constitutionally opposed that sort of thing.”

For years, WEF has been accused of elitism, with critics arguing that the top business people and politicians who attend are out of touch with everyday people.

That hasn’t been helped by the complicated coloured badge system operated by the event. Top level white badge holders – who are either invited, or pay thousands to attend – can access all parts of the event, while others face restrictions.

Bottom of the rung are “hotel badge” holders who can’t get into the main Congress Centre at all (although they can attend the parties and events that happen outside).

WEF has said it aims to bring leaders from business, academia, politics and charity together for the wider good, and it always invites diverse voices.

Most of those attending also seem to feel that the idea of ranking in terms of importance is just a fact of life. Designer and charity worker Fernando Laposse from Mexico tells me: “That’s how the world works isn’t it… and we’re grateful to be invited.”

The BBC has contacted the organisation for a comment.