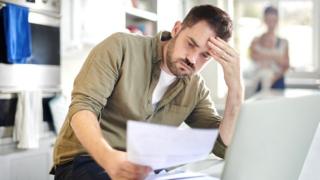 Shoppers have been warned about the risks of buy now, pay later schemes by a helpline that expects a call about debt every four minutes in January.

The Money and Pensions Service, which is backed by the government, said it was gearing up for its busiest period of the year.

Many people are receiving debt repayment demands before their first pay cheque of the year.

Youngsters are being warned about sleepwalking into financial problems.

Caroline Siarkiewicz, acting-chief executive of the Money and Pensions Service, said that falling behind on payments as part of buy now, pay later schemes – offered by many retailers – can affect access to borrowing in subsequent years.

“These schemes attract younger people and are pretty straightforward,” she told BBC 5 live’s Wake Up to Money programme.

“Many do not understand borrowing in this way. It is great if you pay it off quickly. But many are not thinking about the future enough before they sign up to take out these products.”

Complaints service Resolver said it had received nearly 10,000 inquiries about the issue since it began recording them separately in September 2018.

The other major concern at this time of year is the arrival of credit card demands following Christmas spending, particularly before the first wages of the year land in people’s accounts.

“We know what a difficult time of year this can be for families who are worried about the bills piling up,” said Ms Siarkiewicz.

“It can be tempting to avoid confronting money worries after an expensive Christmas but the sooner you act, the easier it will be.”

Where to go for help with debts

Also, Citizens Advice has specialist money advisers, while other organisations that can help include StepChange, Christians Against Poverty, Debt Advice Foundation, National Debtline and the Debt Support Trust.

An estimated nine million people find regular bills a burden or fall behind with them on a consistent basis, according to the Money and Pensions Service.

In some cases this can lead to insolvency. These have included some high-profile cases, such as the bankruptcy of former model and reality TV star Katie Price.

However, the service, and other free debt advice charities, have helped millions of people in financial trouble without the need to end up bankrupt, or in any other form of insolvency.

Research has shown that people who talk about their finances feel less stressed or anxious and more in control.

Other advice includes working out everything that is owed and writing it down, then paying the most important debts first – such as mortgage, rent and energy bills.

Advisers also suggest being strict about setting, and keeping to, a budget. This can be done via a budget planner, available on charities’ websites, or simple by writing down all expenditure and income expected for each month.