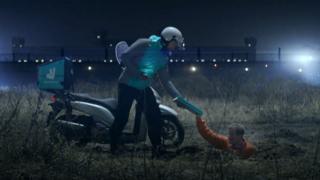 In the ad, someone is shown receiving a delivery in a field after apparently tunnelling underground to escape from prison

A TV ad for Deliveroo has been banned for suggesting the food delivery firm could deliver anywhere in the UK.

The ad, shown in March, showed various scenes of people using the Deliveroo app and having food delivered to them, all in unusual places or circumstances.

The Advertising Standards Authority (ASA) said it was “likely to mislead” because it wrongly implied delivery “was unrestricted throughout the UK”.

Deliveroo said it felt on-screen text had made it clear restrictions applied.

Meanwhile a voice-over states: “Order what you want; where you want; when you want it” while text at the bottom of the screen reads: “Some restrictions apply, obviously…”

There were 22 complaints from people who, knowing that Deliveroo did not deliver to their areas, said that the ad was misleading.

Deliveroo’s parent company, Roofoods, said that the exaggerated scenes in the ad showed it was not meant to represent real life – simply that it was possible to order from Deliveroo in different everyday locations.

It also said customers could check their app to see whether their area was covered without incurring any cost.

But the ASA said that without any additional explanation, viewers were likely to take the claim “Order what you want; where you want; when you want it” literally.

“Because we considered the ad suggested delivery was unrestricted throughout the UK when that was not the case, we concluded that it was likely to mislead,” it said.

The ad must not appear again in its current form and Roofoods has been told to ensure that similar claims do not appears in its marketing again.

A Deliveroo spokesman said: “Deliveroo designed a playful advert to show that, through our service, people are able to order food to a wide range of places, whether home or work, for a range of occasions.

“We know some will be disappointed that their local area isn’t currently served by Deliveroo, but we are expanding rapidly across the UK.”