January 12, 2020 by Joshua Marshall No Comments 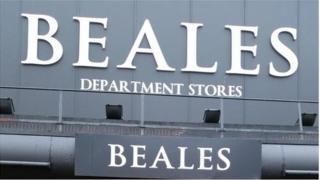 One of Britain’s oldest department stores has warned that it could collapse into administration.

Beales, which began trading in Bournemouth in 1881, said 22 stores and 1,000 jobs were at stake if it cannot find a buyer.

The firm is negotiating with its landlords to try and agree rent reductions.

It is also in talks with two potential buyers – a rival retailer and a venture capital investor, the BBC understands.

Chief Executive Tony Brown led a management buyout of the firm in 2018.

Now Beales, with its 22 stores up and down the country, confirmed that it may have to call in administrators.

Beales has been around for almost 140 years, but poorer than expected trading over Christmas threatens its survival.

Even if its immediate future can be assured, store closures aren’t being ruled out, with a risk to jobs.

The company has stores in the following towns and cities:

It comes as UK retail sales fell for the first time in 25 years last year.

Sales in November and December fell by 0.9%, according to industry body the British Retail Consortium (BRC).

John Lewis has warned that its staff bonus may be in doubt as it reported Christmas sales at its department stores were down 2% for stores open at least a year.