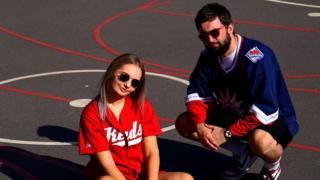 Can it ever be green to buy clothes and only wear them once? Well it might be, if you buy second-hand ones and sell them again when you’re finished with them.

As concerns rise over the unsustainable price tag of fast fashion, some young people are looking online for a way to look good for less without hurting the planet.

Sylvie Mackower, 20, from London wasn’t thinking about the environment when she set up an account on an app called Depop to sell on items she no longer wore.

“I really just wanted to get rid of old clothes and get a bit of money doing it,” she says.

The Depop social shopping app blends the aesthetic and social aspects of Instagram with the buy-and-sell format of eBay. It was established in 2011 by Simon Bekerman and now has over 15 million users in 147 countries.

Since creating her account five years ago Sylvie has become more conscious of sustainability and encourages young people to consider their footprint while shopping.

“Not purchasing new items where possible and recycling things you get tired of leaves you with a pretty small consumption footprint,” she says.

“This is what people have to commit to if we want to hold onto our planet.”

Depop is not the only app targeting this space – many second-hand clothes are traded on eBay, and even the fast-fashion retailer Asos has a Marketplace feature which allows users to resell used clothes.

“A lot of people prefer to shop online rather than visit second-hand shops, so it is positive that young people are looking into shopping more sustainably.”

Prof Cooper’s research into fashion sustainability was used by a group of MPs who called on the government to implement a clothing tax in the summer.

He believes more can be done to persuade younger people to lower their clothing consumption.

“I think as long as we have cheap fast fashion goods we are going to have a problem. The issue with clothing consumption is the sheer volume of garments produced which end up in landfill,” he says.

Lauren Ashcroft, 21 from Durham uses Depop regularly to change her wardrobe sustainably on a budget.

“You feel better about buying from a Depop seller because you aren’t supporting a company that mass produces clothing.

“I think sites like Depop are good because you can often find exactly what you want at a more affordable price as well.”

“My generation tend to need to shop on a budget, and it’s quite easy to negotiate the price with sellers online if you think the price is too steep,” she says.

Lauren also believes that social shopping apps are useful for buying clothing for events like Halloween, as costumes often end up in landfill after one use.

“I bought and sold my Cruella Deville costume I wore two years ago,” she says.

“Most people change their Halloween costume each year, so it’s better to buy a costume second-hand and sell it on as it generates less waste.”

Although many people use Depop buy and sell clothing they no longer use, other users open up business which specialise in second-hand clothing.

Kieran Thwaites, 22, from Loughborough, first started Thwaites Vintage on Depop in 2015 and has amassed 30k followers on the app.

“I would always encourage people to shop vintage clothing so less ends up at landfill. I grew up visiting charity shops with my family, we have always been a bit thrifty like that.

“In sixth form I decided to sell my old clothes on Depop and had some luck. Then I started selling in specific niches, which is my biggest advice to anyone trying to run a vintage store.”

Since launching his business Kieran has become more eco-friendly, and regularly sets up pop-up events around the UK to generate less waste and speak to customers.

“I have recently made the switch to recyclable mailing bags and use paper bags rather than plastic, I try to run my business responsibly.”

He is also working with Leicestershire council to encourage young consumers to shop more sustainably.

“One of the ideas I pitched was a £10 charity shop challenge. I want to show people you can actually get decent clothes for a decent price.”

Sustainability is a main motivator for Nikki Millar, 29, from Leicester, who urges young people to be creative with their clothing and shop vintage.

“I’m an avid carbooter, I love seeing old items get a new life,” she says.

“At the the time I started my business the high street was very unimaginative and the internet barely existed so online shopping was a no-go for me.”

“I had built up quite the collection of colourful cartoon duvet covers so I began making my own clothes. People would always ask where they could buy my clothes so I started a Depop.”

As well as Depop, Nikki has since opened up Silly Girl Club as a boutique on Asos Marketplace which features small boutique businesses selling vintage clothing and handmade items.

Although she now has a bigger platform there has always been an underlying environmental motivation for her brand.

“The textile industry creates more CO2 emissions than the combination of aviation and shipping,” she says. “I would love to see people wearing more pre-loved stuff.

“It’s conscious consumerism and as a bonus, you won’t see someone else wearing the same outfit. I’m proud to say 99% of my wardrobe is pre-loved.”