‘Deposit-free renting left me more than £500 out of pocket’ 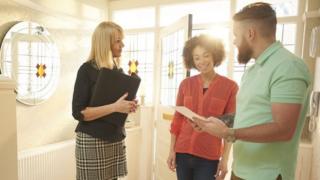 Concerns have been raised over “deposit-free” renting being mis-sold to tenants who do not understand the costs involved.

The option allows renters to pay a smaller, generally non-refundable fee in place of a traditional deposit.

But campaign groups and the ombudsman have warned some are pushing deposit-free options without making it clear they could cost renters more over time.

A traditional deposit is typically up to five weeks’ rent – but this is refunded at the end of the tenancy, minus any deductions for damage or unpaid rent.

With deposit-free options, renters pay less initially – usually a one-off payment equivalent to one week’s rent or a monthly fee. But this is generally non-refundable and cannot be used to pay for damages.

When Simon first heard about the possibility of renting without paying a deposit he couldn’t believe his luck.

The 23-year-old was keen to move out of his family home to live with his partner – but they didn’t have enough for the deposit of more than £1,000 to rent in Sussex.

Eager to move quickly, the couple decided to rent through an agency which offered a deposit-free option.

It wasn’t until they had already put money down and were going through the paperwork that they realised the monthly fee to rent without a deposit was money they would never get back.

Simon has been living there for more than a year – and has paid more than £500 in fees so far.

He feels the agency did not highlight the fee was non-refundable.

“I think for something like that all of this should be explained to you before they even let you go for it – you shouldn’t need to hunt down the answers,” he adds.

Simon says if the terms of the arrangement had been explained fully to him he would not have chosen to rent without a deposit and would have taken out a loan or carried on living with his family to save up to cover the upfront cost.

“Then at least we would get our deposit money back – rather than it going down the drain,” he says.

In response, the agency said it was sorry Simon felt the terms of its deposit-free option were not explained clearly enough but insisted there was clear communication from branch staff by email and he had signed a document confirming he understood the terms.

It said the terms were “made clear at every stage of the rental process”.

The property ombudsman, Katrine Sporle, whose office resolves disputes between consumers and property agents, says other renters have had similar experiences.

She says one tenant was forced to pay an administration fee to switch to a traditional deposit – even though they said they had not understood the terms of the deposit-free option.

Others were told they had to use a deposit-free scheme to rent with an agency.

Government guidance says a landlord or agent cannot insist a tenant uses an alternative to a traditional deposit, but it can be offered as an option.

Ms Sporle says deposit-free options are not necessarily a bad thing but agents should ensure tenants understand the terms.

David Cox, chief executive of ARLA Propertymark, which represents letting agents, says it welcomes anything which helps renters struggling to pay a new deposit before they get their previous one back.

However, he says, it is important tenants understand fees for deposit-free schemes are generally non-refundable.

Campaign group Generation Rent says some tenants feel under pressure to accept a deposit-free option in a competitive renting market.

Letting agents can earn commission from selling the products and schemes owned by agents themselves can also be lucrative.

The group’s Georgie Laming says some agents see this as an income opportunity since the majority of letting fees were banned in June last year.

And there are now at least eight products on the market, with differing terms, which she says can prove confusing.

Some charge tenants as much as £100 to dispute a damage claim from their landlord – a fee which does not exist for traditional deposits, which are held in a government-backed scheme.

Ms Laming says she can understand why tenants might be tempted by deposit-free renting when the average up-front deposit in England and Wales is £1,108.

However, she recommends looking at other options – as some councils and employers may provide interest-free loans to cover deposits.

The government also plans to introduce a “lifetime deposit” to let renters transfer some of the deposit paid for a previous tenancy to the next.

This would make it easier for renters to move without having to pay a new deposit before they get their previous one back – although it would not help first-time renters.