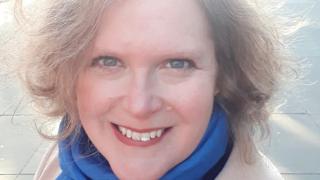 “They even sent you a codeword. You had to write it out on a piece of paper and include it in a photo with your feet and the scales,” says Faith Archer, a money blogger at website Much More With Less.

Faith is one of a number of UK dieters who have turned to weight loss “wager” websites as an incentive.

Potential customers in the UK are now being targeted with adverts on social media.

David Roddenberry, co-founder of HealthyWage, told the BBC his firm started marketing to the UK this year.

The company makes personalised bets with its customers, where they pick how much weight they would like to lose, and over what time. The prize money varies depending on the amount of weight a person has to lose.

Someone who wanted to lose a small amount of weight could bet £300 in total over 10 months, but make just £33 if they succeeded. If they didn’t hit their goal, they would lose all of their money.

He added: “About one third of our participants accomplish their goal and get a prize at the end.”

DietBet, the company that Faith signed up to, say that about 50% of customers win their four-week bets. It did not however provide data for those signing up to longer, more expensive bets.

“I am quite a competitive person and the idea I could actually make money by losing weight really appealed,” says Faith.

“The aim was to lose 4% of your body weight within four weeks and whoever managed to achieve that target would share out the money at the end.”

DietBet’s participants pool their money and the company takes a slice of that cash. If everyone wins, it foregoes its share so that no one gets less back than they put in.

“We got sent vaguely encouraging messages over the four weeks and there was a certain amount of chat among the group,” says Faith.

“I had a bit of a panic at the end about whether I had actually done enough to win my bet. But actually, I lost a few pounds more than needed,” she adds.

“Unfortunately, we must have been a really motivated group because it turned out everyone had won their bets.

“So I just got my $20 back. In fact, with the exchange rate I think I got slightly less back than I had put in at the beginning. But I had lost the weight and I think it did encourage me.”

On the surface, this looks like one way tech firms are trying to disrupt an existing market – weight loss is big business in the UK.

However, there are real concerns that because it is online and competitive, weight loss wagers could enable unhealthy and even dangerous behaviours.

A spokesperson for the British Dietetic Association (BDA) told the BBC: “The fact that they ‘gamify’ weight loss and add a competitive element to losing weight would be hugely detrimental to those with poor relationships with food.

“Those with eating disorders could use a website such as this to justify dieting and restriction for monetary gain. That could have significant impacts on both mental and physical health.”

The eating disorder charity Beat says it is very worried about the potential impact of these wager websites.

“The evidence is pretty clear that fitness wagers, fitness apps, anything where the individuals are able to track their weight loss and use that in a competitive or a ‘gamification’ way is extremely dangerous for people with eating disorders,” said a spokesperson.

“It’s been shown to exacerbate their eating disorder behaviours and make recovery much harder.”

Different companies have different ways to stop people participating if they cannot do so safely. Those include “flagging systems” and referees, but none of them are fail-safe.

Amanda Avery, an obesity specialist dietician and chair of the BDA’s Obesity Specialist Group, said that motivation can often help with weight loss, though.

“But there are more accessible motivators. Somebody could put a pound in a pot for every pound they lose and then save up and buy themselves a nice new outfit or something.

“If they could find some support whereby their diet improves, they manage to increase their physical activity levels, they are going to be much more likely to maintain any weight loss they achieve.”

‘There is a danger’

For Faith, making a wager was simply an extra incentive. But she does acknowledge that a larger or longer wager than hers might have been an issue.

She said: “I think with any process where you are being weighed, there’s a danger that people might take it to extremes or not follow a healthy eating plan. But that applies whether it’s a bet or a slimming club where you show up in person.

“There were bets on offer where you had to put in a significantly larger amount of money for longer periods of time. I was a bit more wary of that.”

“Wagered” weight loss worked for Faith, but did it last?