Does a Pride event need Kylie or Ariana Grande? 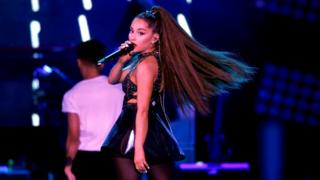 Pride events have become big business, with big name pop stars and big ticket prices to match. But does that distract from their original purpose as inclusive events for the LGBT community?

Manchester Pride this weekend is the final large-scale event of the UK’s long Pride season – with the bank holiday weekend usually attracting visitors from around the country. This year it’s going to be different. there’s a new site for the main stage – Mayfield – and a new name, Manchester Pride Live.

And it’s got big name headliners – with Ariana Grande making an emotional return to the city for the first time since her One Love concert held in the aftermath of the suicide bomb attack at her 2017 Manchester Arena show.

Pride festivals have changed dramatically since the first march in the UK in 1972. Then, about 1,000 people took part in a rally to Trafalgar Square.

A gay pride march in Trafalgar Square, London, in the late-1970s

Manchester’s festival started in 1985 and by 1991 had become Manchester Mardi Gras – eventually becoming a major fixture for the city. But as it grew it got more expensive to put on and in 2003 it was controversially decided to close off Manchester’s gay village and sell tickets to pay for the event.

Manchester pride isn’t alone. Tickets for Brighton Pride, which was headlined by Kylie Minogue went up to £42.50 for day tickets, and cost more if you wanted to go to the bars in Brighton’s St James Street area.

Regan, a social media manager from London, says he’s spending at least £400 on the weekend. “The hotel is probably the worst part because it’s a necessity and yet you’re only there to sleep and shower, but everyone puts their prices up.”

Manchester has been selling tickets for its annual event since 2003

For Regan, the line up was the big attraction: “I’ve not been to Manchester Pride for about four or five years now. Brighton Pride’s artists are always amazing but this year the line-up didn’t appeal in the same way, and then when Ariana Grande was confirmed for Manchester, it was a no-brainer for me to switch.”

Not everyone is convinced. Keir, a postgraduate student at Manchester University has planned a weekend in Portugal instead.

“We’ve been going to Manchester Pride for the past few years and always bought the early bird tickets for the full weekend. We decided not to go this year because of the massive price hike.”

Helen, who works at a primary school has also been put off by the cost “We did London which is free but the cost put us off Manchester this year.” And she’s unimpressed with what the big names do to Pride festivals.

“We were offered £25 Brighton tickets this year but declined as it’s not what it used to be – an inclusive free for everyone to celebrate Pride. It’s basically people travelling for a cheap concert with Britney or Kylie.”

However, Mark, a voiceover artist from Oxford, doesn’t feel the same way: “At Brighton watching Kylie we were next to one gay family and one straight family who had huge amounts of respect for Pride and what it meant.

“That’s why they’re good events… the big pop act brought them all together in a way that wouldn’t have happened if she wasn’t there.”

Many tell me they are choosing to go to events without the big names. But these festivals can feel a pressure to compete. Pride in Hull is one of the UK’s largest free pride festivals, with more than 60,000 taking part this year.

“Audience expectations are getting higher and higher,” says Matt Walton, chair of Pride in Hull. “If you haven’t got a line-up filled with big names, people are really critical.

“It’s great that the major Prides can put on these great shows for their audiences, but people need to be realistic, we can’t all afford international artists.”

Pride in Hull costs around £100,000 to put on, and most of the money goes on the performers. Matt says the costs are going up: “A lot of people assume that we get preferential rates or even that performers do it for free because we’re a charity or because they want to support Pride.

“I don’t begrudge artists charging because it’s their livelihood and if they perform for free they aren’t earning, but it does feel like fees are getting higher”

As a free festival Hull relies on donations and sponsors to make the event happen. “In an ideal world it would remain free,” says Matt.

“However, it feels less and less sustainable and our donations are going down each year. We might have to start looking at different models, but we’ll always strive to make sure there is a free way to enjoy Pride in Hull.”

As a free festival Hull relies on donations and sponsors

Manchester Pride says while they don’t think there’s a demand that acts get bigger and bigger each year, there is a demand for recognisable names.

“We ask attendees what they want from their festival and every year they tell us that they’d like international acts to perform as a part of the celebrations,” says Mark Fletcher, Manchester Pride’s CEO.

“Whilst I personally don’t think that it is important to have big name acts in order to celebrate LGBT+ life, it’s important to recognise that big acts helps us to amplify our campaign for LGBT+ equality.

“Allies are essential, and as allies big name acts draw lots of attention which helps to support the modern LGBT+ pride movement.”

Jonathan, a case-worker from Bristol, agrees: “Having Sophie Ellis-Bextor and Mel C at Bristol Pride was amazing. It felt like our city and region mattered, that our pride celebration could have the energising (free) march, donation only entry, and have these big acts come and celebrate with us.”

Mark points out that much of Manchester Pride is free, including the parade and the candlelit vigil, and that this year they have introduced a free event for young LGBT+ people called “Youth Pride MCR”. They also make some free tickets available for Gay Village Party and Manchester Pride Live for LGBT+ people in financial hardship.

Despite the costs, demand is definitely high. More than 170,000 people are expected to attend at some point over the weekend and tickets have already sold out for Sunday, when Ariana Grande tops the bill.