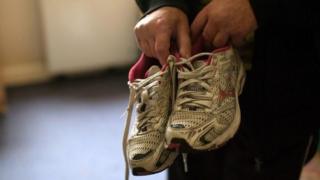 A worker who came to Britain has said he was bartered between criminals and then used to work on doorstep scams.

The man said he was beaten, threatened and forced into work in return for tobacco, alcohol and bread and butter.

It urged consumers to be aware of home improvement scams, as well as alert to the individuals who may be involved.

The slavery victim, who has not been named, told NTS he was never paid but was “totally powerless” as the criminals took his passport, ID and money.

“We would fix up houses, do gardening, everything, house to house,” he said. “I had to work from the early morning until very, very late, seven days a week.

“I was sold, from person to person – bartered for right in front of my face. I heard one man say I wasn’t even worth £300. I felt worthless.”

Eventually, he said he walked for 10 days to get away from the slavemasters, and was helped by charity Hope for Justice.

NTS, which was set up by the government in 2012, said gangs targeted vulnerable young men from deprived areas. Many were alcohol or drug dependent.

Lord Toby Harris, who chairs NTS, said: “The doorstep scammer is not a lovable rogue. Often behind the person who turns up at your door offering cut-price services is a serious criminal.

“Not only are they happy to rip off older people, those living on their own, and indeed anyone who is taken in by their patter, but they may also be exploiting and even enslaving vulnerable people to help them carry out their crimes.”

He said that consumers needed to be aware that many of the scams that occurred were modern versions of traditional scams.

Some of the biggest emerging threats include: